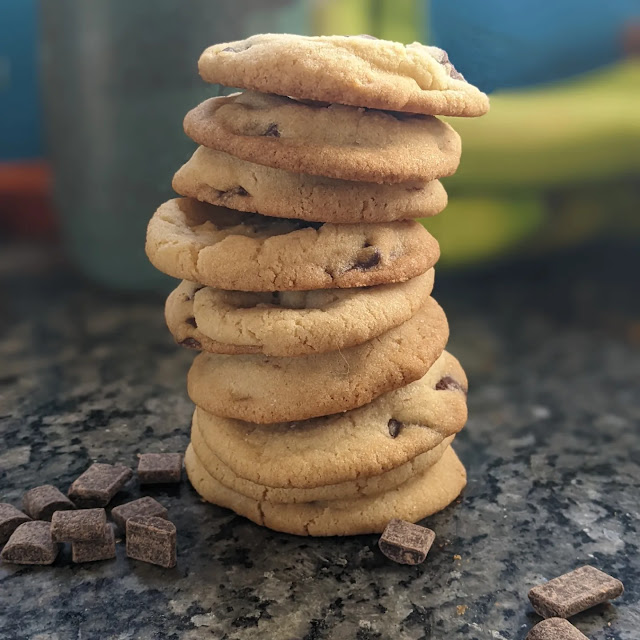 Just hear me out on this!
It won't taste 'fatty' or 'porky' or anything like that. Oddly, these cookies will be healthier than you think because you're using lard instead of butter...and it'll be just enough of a flavor difference that you'll go "ooh, what's that?" Even best, if you like a CRISP and CRUNCHY cookie...this is the cookie recipe for you.

A quick note: I am a Jewish lady but I don't keep kosher. This recipe is using pork fat, aka lard. I'm sure you can use beef tallow(that's rendered beef fat) but what you should know about tallow vs lard is that tallow will be much harder when cold and is, therefore, better suited, in my opinion, to crafty things like making candles. Lard and schmaltz are my favorite animal products to use in cooking and baking, so here we go.

This is a play on a chocolate chip cookie, and I must say that the result is quite fascinating.

First, lard has a much higher melting point than butter does, but will remain soft for quite a bit. I do recommend a standing mixer or an electric mixer for making these cookies as your wrist will get quite tired. Let's make it!

Using the paddle attachment of the standing mixer on medium-high, you will beat the lard until it's nearly white in color, which will take at least two minutes. Lard has a high smoke point, which means it's stiffer than the average bear. Add the sugar, then mix slowly, then less slowly...the points you're going to gradually increase the speed until it's at high, and then you'll let it mix for a solid 60 seconds on the highest setting until it's all incorporated. Then, turn the speed down to low to add your egg. While that's stirring in, combine all of your dry ingredients in a bowl.
When the egg is fully incorporated and nothing appears to have separated or curdled away, add your vanilla extract. Mix for about ten turns and then turn off the mixer. Stir in the flour by hand, and then stir in the chocolate chunks by hand as well. Pop the dough in the fridge and allow to chill for at least 30 minutes before baking. Ideally, though, you'll want to freeze the dough in pre-scooped balls overnight. I find this gives a much gooier cookie!
No matter what chilling method you use, you're going to want to bake this at 350 degrees for 10-12 minutes. While they're baking and cooling, let's chat for a minute about lard, the rendering of it, and why you should do so.
First and foremost, saving what you have access to for a rainy day is good, especially when that's an item that will stay good for a long time. Second, it's shockingly healthy. I do understand that some folks have feelings about using animal fats, and that's a-okay by me! I will tell you, though, that lard is oddly high in vitamin D! It also has a fair bit of oleic acid, which has been linked to decreasing your risk of depression.  It's high in good fats, which is good for your cardiovascular system.
Oh, and don't stress too much about fatty stuff. Humans evolved to crave and consume fatty and sugary things, so it's actually not as bad as you think. Like everything, moderation is the key.
As I'm sure you might know, you can buy lard in most grocery stores located in neighborhoods with a large Latinx population. If you aren't so blessed, you'll have to render it yourself. Fortunately, this is much easier than you might think! I do it often enough, and I've yet to burn the house down, so that should tell you something...especially since I've got a toddler, now. 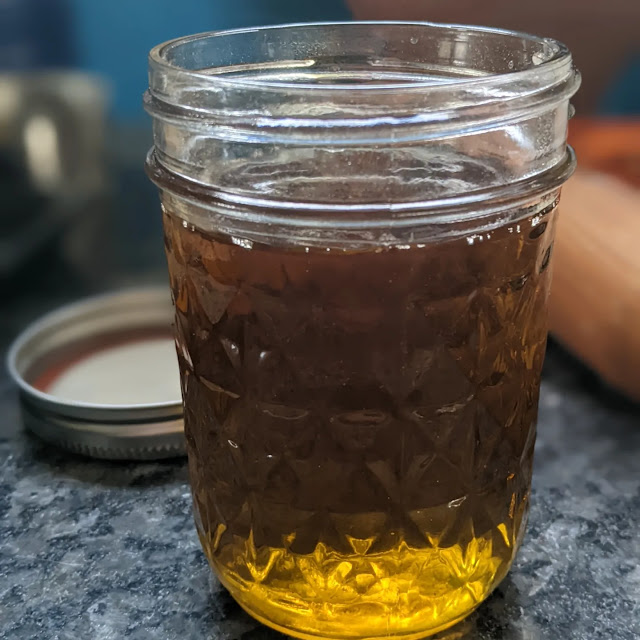 I buy pork shoulder (or pork butt) at a local butcher and I always get the ones with the largest fat cap I can. When I bring it home, I use a small, sharp knife to trim off the snow-white fat and pop it in a casserole dish. Since I cook my pork shoulder low and slow anyhow, usually at 200 degrees for several hours, I do the same thing with the fat in the casserole. After about four hours, the fat is a gorgeous liquid that you can strain into jars. You can keep them in a cool place like the back of a cabinet but I keep mine in the fridge. You can also render the fat on the stovetop for a much quicker endeavor, but I prefer to be lazy about it since I can't babysit rendering fat as easily as I used to.
I love this recipe because it allows you to use what you might have on hand without needing to go to the store for a special run. I first made these because I wanted chocolate chip cookies but I didn't have any butter to speak of in the house, and I really didn't want to use shortening. Lard was the perfect thing for me to use!
I hope this has inspired you to give lard a chance. If you're into more cookie recipes, try these!
Happy cooking and happy eating!
chocolate chip cookies cookie recipe cookies crispy cookie crunchy chocolate chip cookie desserts with lard how to get a crisp chocolate chip cookie lard pantry recipes recipes with lard

Last time I was at Room 39, I was actually bumming their internet to finish up a few writing assignments, as well as some work stuff. This time, I'm here because they were just too gosh-darn accommodating and nice about the whole thing that I just had to come back. Their Foursquare  hinted towards the Oven eggs, so I just had to give them a go. Plus, they have Harney  & Sons tea...and we all know I'm a sucker for Earl Gray. The tea is served with steamed milk, which comes in a proper little stainless steel kettle. The tea cup is more of a mug, which is mismatched with the saucer, but only a really anal prick like me would ever truly notice. The tea is even served with an adorable little demitasse spoon, which is usually reserved for espresso and coffee drinks.  The tea already comes in the mug, however, with the tea bag, so you can't do the "proper English way" of scalding the milk with the hot tea, which changes the flavor...but one would argue that with st 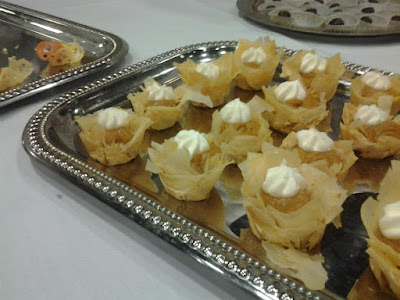 Sorry to my faithful readers(all two or three of you) for not posting more often; finals are upon us at the AI-International in Kansas City, and the seniors did their final Capstone projects. It was a big turnout! And everybody did fun little hors d'oeuvres, either in sweet or savory form. So I have something to say to all of you. Some might be upset, and some might be relieved...but the Era of the Cupcake is dying. Time for a new Hero: a multi-dimensional hero with endless possibilities for sweet and savory, flaky and tender...I'm speaking, of course, about pie. Cupcakes, I'm leaving you. Pie??? Yes, pie! Pie is the new cupcake, and not just in its big 9" form, either. My friend Thomas did phyllo dough pumpkin pies for his Capstone project, and LOOK AT HOW FUCKING CUTE THEY ARE. When I picked one up to taste it, it was buttery and flaky - like pastry made of paper! The custard itself was rich and velvety, like an old love affair. And the best thing about 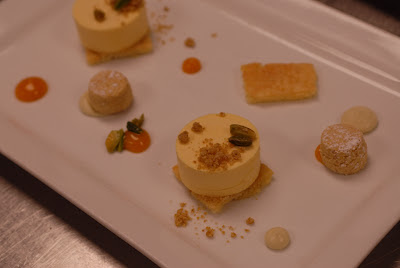 This will be another visual blog, similar to the Rainbow Cake blog. I don't know what else to say other than India-themed wedding cakes are fantastic. I mean, really, they are. Do you guys remember that post I did about the desserts from pastry chef Nick Wesemann? He did an India-themed dessert based off of an Iced Mango Lassi. It had a cardamom bisquit, some pistachio elements, frozen yogurt...all the good things. India has amazing flavor profiles. When I was studying India in my World Cuisine class, the thing that shocked me the most was that the Indian food I've had in my life was absolutely nothing like the Indian food I'd had before. You get new things like 'hot/warm' flavors and 'cool' flavors, versus hot and cool temperatures.  You introduce yogurt as a savory, tangy element - like sour cream only way better. And Indian food isn't always ridiculously spicy. In fact, it is more about balance than anything. Curry is a fantastic flavor for a