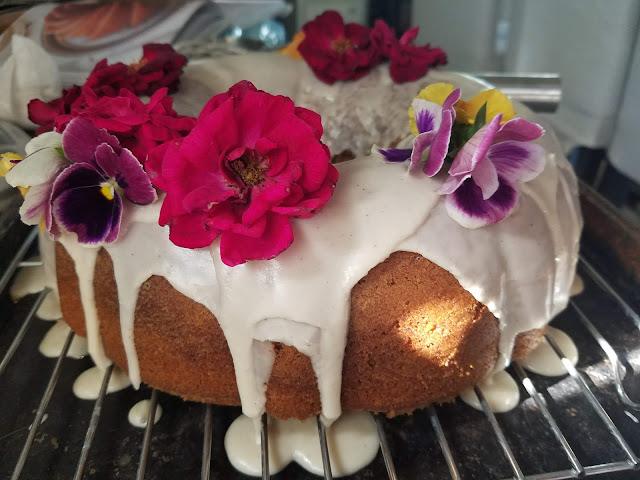 There's nothing quite so fun as a birthday party, and just because you're a grown-up doesn't mean you can't have one. I wholly disagree with the creed that adults aren't allowed to do birthday parties because they're considered childish. What in the world is the point of being alive today if you can't find little reasons to celebrate? I will say, though, that I'm now 30 and I still don't know what you're supposed to do while people sing "Happy Birthday" to you.

This rum cake has come to be my favorite birthday cake. I baked one for my own birthday just last March and it was a fan favorite. I baked two different cakes, of course, and folks seemed to shockingly prefer the rum cake over the avocado oil cake - at least, that's how it seemed, just because I hadn't any left over and I had plenty of the other to spare.

The rum cake I make is an adaptation on a Kentucky Bourbon Cake. This historical confection from the great American recipe book was the prize-winning entry by a certain Nell Lewis at the 1963 Pillsbury Bake-Off Contest in Platte City, Missouri. What's neat about using alcohol to bake is that it is a liquid that won't form gluten, no matter what. You can mix and mix and mix the flour with any kind of rum, vodka, or bourbon and it won't go gloopy. You do need gluten in cake, of course, to trap all of those lovely air bubbles and therefore make your cake rise, so you only use about a quarter cup in this recipe, which was from one of my favorite cookbooks, Vintage Cakes. 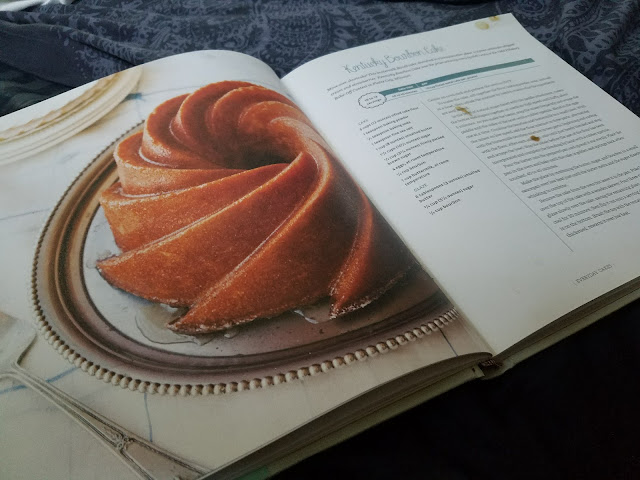 When I think of bundt cakes, I think of classic Americana. What better to bake for your Memorial Day celebration? Give this a go. You can find so many funky bundt pans in different designs, especially if you comb thrift stores. There are many bundt pans out there, sitting on shelves, just waiting for you to take them home and use them.

Preheat the oven to 350 degrees F. Prepare your bundt pan with a bit of oil and a light dusting of flour. Prepare your glaze by boiling together the water, sugar, and cinnamon stick. Once it's come to a boil and all the sugar has dissolved, add in the rum. You want to add it in now because otherwise all the alcohol would cook off and I don't think we want that. Set it aside. Sift all the dry ingredients for you cake together.

Whip together the shortening and sugar using the whip attachment of your standing mixer until light and quite fluffy. Coconut sugar is an excellent one-for-one substitute for cane sugar. It's a less-refined (but just as dignified) form of sugar that's far more sustainable than many alternatives. It takes quite a bit less processing, as well, and it has a nice note of depth in it, which is appropriate for this cake. Add each egg, one at a time, until each one is fully incorporated. Split the vanilla bean down the middle and scrape one half of the beans into the egg mixture. Save the other half for your icing, which you'll make later. If you like, you can put the scraped pod in either the sugar container (to make vanilla sugar) or into your still-warm syrup for a kick of extra flavor.

Add in your dry and wet ingredients, going dry-wet-dry-wet-dry. Stir gently, of course, just to let the batter come together. Make sure to really scrape the hell out of the bottom and make the batter homogeneous. Pour into your bundt pan, give a few tap-tap-taps to make sure everything is spread evenly, and bake for 40 to 45 minutes. Take this time for yourself to read a magazine and drink the rest of the bottle. You're at home, so I'm assuming nobody is there to judge you.

Once your cake is baked - springing back when touched, and all - remove it from the oven and let cool for at least 15 minutes before turning it upside-down on a cooling rack, set inside a baking sheet to catch the glaze. Once your cake is turned upside-down to continue its cooling, you may assemble the glaze. However, if you are using the simple syrup...

Straight out of the oven, with your bundt pan facing cake-side up, poke plenty of holes into your cake with either a wooden skewer or a toothpick. Spoon half of the syrup straight over the cake and allow to soak in, being sure to spread it evenly. Wait your designated 15 minutes and then flip the cake over onto your cooling rack. Once your cake falls out  of the pan on its own, glaze the remaining syrup over the top of the cake. This should help it cool. Now, for the glaze...

Simply scrape the other half of that vanilla bean into the entirety of the glaze ingredients and whisk together until it's a sort of medium consistency - not gloopy but not at all runny. Dampen a paper towel or clean tea towel and cover the bowl so it won't go dry. Your cake should cool and fall easily out of the bundt pan, and should be  no warmer than body temperature (and seriously that's the absolute MOST it should be) when you ice this cake. I wouldn't recommend it, of course, as it should be at least room temperature so the glaze won't fall straight off, but your simple syrup should have helped to cool it at this point.

Once your cake is cool enough, spoon over globs of the glaze, in whichever fashion you like. I decorated this cake with fresh flowers from my garden. Pansies, dandelions, and roses were in plentiful supply for me on that day, but make sure you check that your own flowers at your own disposal are edible, and not poisonous.

Vanilla Rum Cake with fresh flowers - no mirror glaze, just a classic glaze. 🌹 This is one of my favorite cakes to make for birthday parties 🎂, especially grown - up ones. 🍾🥂😆There's rum in the #cake AND the glaze! You can also make a rum simple syrup and soak it in for an even more boozy treat. I didn't do that because I didn't know if there were going to be any little ones at the party I attended. I'm loving that simpler cakes are starting to have a moment. Simple doesn't mean plain, of course! When I say simple, I mean the kind of cakes that the great American baker made before us. I find culinary anthropology fascinating - this cake is modified from a "Kentucky Bourbon Cake" which won a #baking contest in Platte City in the 1950s! I think it's great that those kinds of things survived long enough for us to try them today. #foodiechats #wannabgourmande #foodblogger #cheflife #instacake #vanilla #midwestlife #KansasCity #classic #flowersofinstagram #cakedecorating
A post shared by Chef Kolika (@wannabgourmande) on May 27, 2018 at 4:31am PDT

Take this cake to your next grown-up birthday party, or make it for your own. It's quite festive with all of the flowers, but you can decorate it however you like. It looks especially festive with plenty of candles! Happy cooking and happy eating!
Posted by Wanna B Gourmande at 3:05 PM