Thanksgiving is my absolute favorite holiday. Even though some Pagans/Wiccans celebrate Mabon as their Thanksgiving, that's not going to stop me from celebrating it with the rest of America on the last Thursday of November.

Thanksgiving is, for me, the quintessential American holiday, where Americns welcomed with open arms the starving, undocumented European refugees and showed them how to survive self-sufficiently on their land. Because of the generous aid of first Americans, the poor, disease-ridden Europeans would have likely starved to death, unable to survive the harsh winter. Why, Benjamin Franklin himself said that the American turkey should be our national bird, and not the American bald eagle.

(Disclaimer: I know that's not a bald eagle. But my boyfriend took that photo of a very distressed-looking bird and I've been dying to use it somewhere.)

Before we delve further, here are some fun facts about sweet potatoes:
Now that we've gotten a bit of fun stuff out of the way, let's get to the recipe! 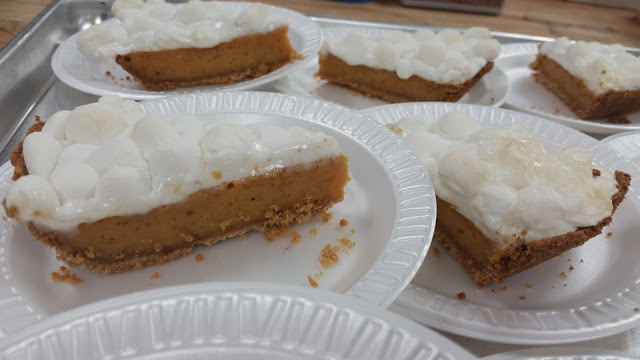 Pie Crust
Filling
Honey Marshmallow
Preheat the oven to 350, and prepare an 11" tart pan with pan spray. You can use store-bought crust, of course, as well as a store-bought graham cracker crust(pictured above). Both taste great, and I'd frankly rather have you eat pie that's freshly made than no pie at all!

Prepare the crust by combining the flour, powdered sugar, and salt in the bowl of a standing mixer fitted with a paddle attachment. Add in your fat of choice(be it butter OR coconut oil) and turn on to stir. The benefit of doing it this way instead of by hand is that the mixture will not be heated up from your body heat. Once the fat has been nicely combined with the flour mixture, add in your egg. If it does not all come together in a (reasonably) solid ball, add just a few drops of apple cider vinegar at a time to allow it to mold together. Tip the pastry onto the marble slab (or countertop if you're not drowning in privilege like I am over here) and wrap it in plastic then refrigerate until you're ready to use it.

To create the filling, I always make it fresh. Just take a big-ass sweet potato and pierced it a few times with a knife. Let it cook in that 350 degree oven until ridiculously soft and tender in the middle, which is about an hour if you have big ones like I do. Once it's soft and easily pierced all the way through with a fork or knife, remove from the oven and immediately wrap in tin foil. Let it hang out for another 30 minutes or overnight, if you like. Simply harvest the puree by scooping it out with a spoon or peeling the skin away...your choice!

Take your sweet potato puree and pop it into the bowl of your now clean standing mixer with the paddle attachment and beat in the sugar and spices for about 2 minutes. Add in the eggs, one at a time, until fully incorporated, then add the milk and salt. Blend until fully combined and set aside.

My favorite way of doing pie dough is using parchment paper and panspray. It's no-mess and you won't risk screwing with your dough by adding in too much flour! Simply take two sheets of parchment paper and liberally lubricate. Pop your pie dough in the middle of the bottom sheet, liberally spray the dough, and top with the second sheet. Roll out the dough between the sheets until it's nicely flat and round. Measure the dough by popping your tart tin on top and rolling until it's about an inch around on all sides. Simply peel off the top layer and pop on your tart tin, upside-down, then flip to right-side-up. Now peel away the parchment and boom! Your tart tin is lined!

Fill your lined tart tin and bake at 350 on the bottom rack of the oven for about 30 minutes. Why do we want the bottom rack? To make sure that the bottom crust bakes, of course! Nobody likes a soggy bottom, so let's make sure that gets nice and cooked...shall we? Your custard pie is baked through when you insert a cake tester/toothpick into the tart and it comes out clean!

Evacuate the tart and allow it to cool while you prepare the marshmallow.

This recipe is a modified version of "Puff the Magic Mallow" via Alton Brown's legendary Good Eats. The full episode is on YouTube!

If you want to just follow the written instructions without all of the science and puppets, though, keep reading...

Combine half of your cold water with the honey, corn syrup, and granulated sugar in a saucepot and cover. Bring it to a boil, reduce it to a simmer, and then remove the top. Pop in your candy thermometer and allow the mixture to cook. I've got one of those super-nifty probe thermometers that has a little alarm to go off when the item I'm temping goes off at the desired temperature, and let me tell you - it's fantastic. I set my thermometer to 240 degrees F, because that's the soft ball stage of candy making, and that's what I want.

In the very clean bowl of my standing mixer fitted with a very clean whisk attachment, I pop in the remainder of my cold water. I take my tablespoon of gelatin and sprinkle it over the top gently. I don't want it to be lumpy, so this is the part where you just take your time and let it soak. Once everything's been sprinkled, I let it sit until I hear my alarm go off for the magic 240 degrees F!

Once your syrup is up to temperature, carefully bring the pot over to the standing mixer and plop in about a third of the syrup, carefully. Turn on the standing mixer to stir in the syrup, and drizzle in the hot syrup in a thin stream. When all of your syrup is incorporated, turn the whisk on to medium-high for 1 minute, and then turn it to full speed and whip until glossy white and lukewarm, which should take about 10 minutes.

Spray the ever-living bejeezus out of a spatula and tip the marshmallow mixture onto the warm tart. You can also put it in a piping bag and make some neat designs, but that's up to you. Put as much or as little marshmallow on top as you like, and pop any remaining marshmallow into a sheet pan, dusted with equal parts cornstarch and powdered sugar. Dust more on top and set aside.

Leave the marshmallow to set for a few hours, and do the same with the tart so you can safely and cleanly cut it. You can store the set marshmallows in plastic bags for up to one month in the cupboard, but I doubt they'll last that long. As for your tart, you can toast the marshmallow using a torch or under the broiler before serving your guests, if you like! Let's make America great again with awesome pie. What do you say? Are you with me?!

Of course you are. 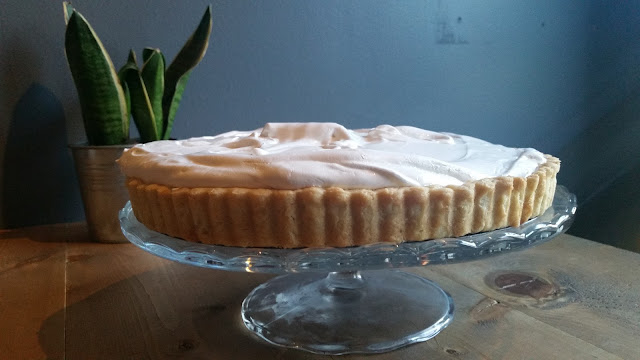