Since I've been the literal worst with publishing posts regularly, I figured I could get back into the swing of it with something easy:

Personally, I tend to dislike the mainstream lifestyle blog scene. It's all about juice cleanses(which have been debunked) or detoxing or taking vitamin supplements or veganism saving the planet...and while I think it's all well enough, I don't think it's a reputable practice that actually does any good for you. Here's a few quick facts:

Another thing I tend to dislike about the healthy eating/mainstream lifestyle bloggers is that it's completely unrealistic for, say, your average millennial to keep up with, financially speaking. I've rambled on about the economics of eating healthier in several blog posts, but here's the big thing:

A salad costs $7 and a cheap-ass burger full of fillers and preservatives costs $0.99.

Please don't write another article on obesity in children or general American obesity until somebody fixes this. Eating healthy is expensive, and the American economy isn't great right now. Until then, here are some ways that you can eat better for free(or for cheap AF)...

Grow a Garden
Seriously, you can do this. Even if you live in an apartment, invest in a window box. Salad greens will grow year-round indoors with a fair amount of sun from a window and a fairly temperate climate. Greens such as beets, kohlrabi, spinach, etc. actually prefer cooler climates, and that's why they're known as winter crops. You can also grow tomato plants indoors or on a balcony, as well as potatoes. Seriously! There are many ways to do potato towers in tubs, and you can do it in tiny spaces!

I realize that it may not be a sustainable idea for many, but for the parts of the year where you can just snip out a quick salad from your salad garden box for dinner will save you so much money. There was a point earlier this spring where I didn't go to the grocery store for over two weeks, and we were eating almost exclusively everything that came out of the garden.

Now that summer's going and winter is upon us, we're eating a lot of potatoes, all grown in a 2'x2' space. Potatoes are like weeds--they'll grow anywhere and they'll grow abundantly.

If you have more space, try things like corn, beans, squash... You'll eat for free, and you'll eat well. You'll also be able to say that you grew that yourself, and have the satisfaction of doing it. I cannot express how easy gardening can be, and how satisfying it absolutely is, especially if you have young children to sit in the garden and help you out with it.

Gardening is a fantastic outdoor activity for children, especially for the brand of those that just love playing around in the dirt. Another fun thing I've discovered about gardening with children: it almost negates picky eaters. I've found that those which are picky eaters are more afraid of what the food is because they don't understand it. If a kid nurtures and loves a cauliflower plant to harvest, it's way more likely that they'll eat it! 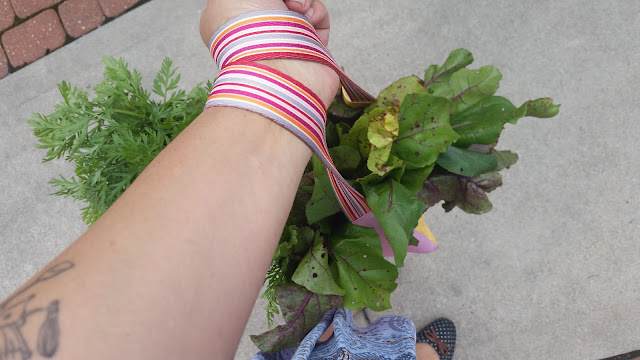 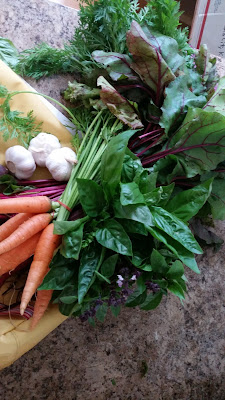 Most farmer's markets take cash and card at this point, and you'll be able to get quite a bit from them. The vegetables that farmers grow are so much cheaper than at the grocery store, and you know where they came from...locally. Most farmers are glad to tell you their places of operation, and you'll actually get to see the faces of those you're supporting. Win!

Another great reason to visit a farmer's market is that you can talk to people that know about the food, who will also tell you how to cook the food, which is a struggle that many deal with. Most of the vendors that come through the market I work at will want to buy healthy ingredients, but hardly know what to do with it when they get home. I'm a chef, and I'm constantly learning.

One of the farmers at my market traded me some Chinese Yardlong beans for a few of my muffins, and I honestly had no clue what to do with them. My instinct was to stir-fry it, but he told me to try them grilled... Surprise! They're fantastic when grilled! I never would have thought to grill that particular vegetable, but I'm really glad that I did.

That particular bunch of yardlong beans were free, but I could have had those for $2, and it was a lot of them. You can get a ridiculous amount of produce for under $10, and if you learn to pop together a few quick things in the right ways, you'll eat much better.

Switch Soda for Water...or Make Your Own! 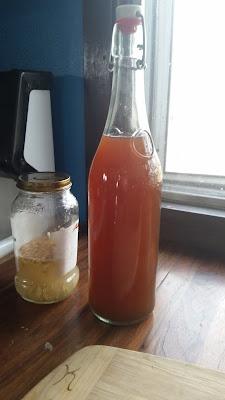 Ginger Bug soda is chock-full of naturally fermented probiotic goodness, and is really great for your health... I've talked about it before, and even blogged about it. Learn how to make your own ginger bug soda here and here!

Fermented foods are good for you. Pickles, sauerkraut, natural soda...it's all good for you, and here's why:

Yeast bacteria crave sugar, so when you tend to eat a lot of sugar, the bacteria that love that stuff will grow. They'll be happy, living in your gut, and send signals to your brain that say: "Hey! We're hungry! Send down some more M&Ms!" I realize, of course, that it's an extremely trite anthropomorphized version of what actually goes on, but that's how I explain it.

Long story short, your guts will crave what you feed them. If you starve your gut bacteria of excess sugar,  you'll stop craving it after a few days. If you feed them veggies and leafy greens instead, however, you will probably hate your life for the first three days, but after a week you will crave all of that green goodness. I'm not joking. Canned sodas made with corn syrup and carbonation make me queasy now, and I once had a friend make me feel better from a horrible tummy ache with a pile of steamed broccoli. Yes. That's a real thing that happened to me.

Oh, and this ginger soda? It's better for you, and cheaper than what you probably pay in the grocery store already.
Posted by Wanna B Gourmande at 7:40 AM