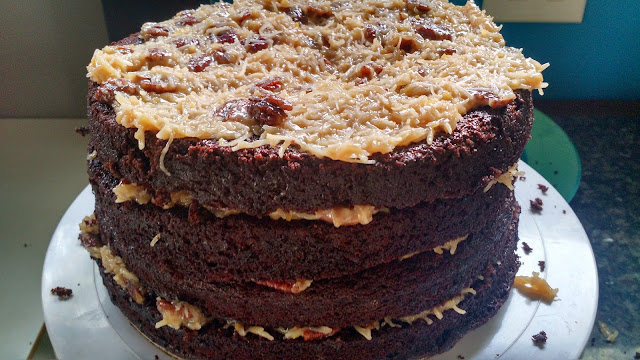 When a friend asked me to make a German chocolate cake for his girlfriend's surprise birthday party, I said yes. After all, I own a bakery and he's dating my friend of six years, so of course I'll jump to help when called for. The party was Saturday and I had a little free time, and they're great about tagging my bakery in Facebook/Instagram posts, so it's essentially free advertising for a party I get to go to anyway.

Okay, so here's the thing:

In memory, I've never made box cakes. Every person I know has had the box cake mixes you buy at the grocery store. They know what a great American cake like a "German Chocolate" cake is supposed to be, where I do not. I can't even remember the last time I ate German chocolate cake, aside from the gourmet Chef-y deconstructed versions at restaurants. If you were to put a gun to my head and point to a line of cakes and say "PICK OUT THE GERMAN CHOCOLATE CAKE" I'd say "Shoot me."

According to a quick Google search, German Chocolate Cake is comprised of a nice chocolate cake with a pecan coconut fudge icing, because nothing says Rheinland like tropical dried coconut and pecans fresh from the orchard. Can we detect the hints of sarcasm here?

Here's why "German Chocolate Cake", as a concept, annoys me:


I was about to go on a full rant about how stupid it is that Americans just randomly assign a nationality to a random cake they invented using the coconuts and pecans that have been in the South since before America was technically founded, but then I did some research:

See what a little research can do? See how I'm no longer angry about something I didn't understand? See that I actually sought out the right answer instead of just going on this long rant about how German Chocolate Cake didn't make sense? See how easy that was?


Sorry. The American Presidential election season is taking its toll on me. I just wish that people would use things like fact checkers or even make a tiny effort to support their ideologies other than the argument of "yes but my FEELINGS"... Anyhow.

German's Chocolate Cake first officially debuted in 1957 in the Dallas Morning Star newspaper when Texas Homemaker Mrs. George Calay submitted it for "Recipe of the Day." The cake gained such huge popularity that it's become the Amercan classic it is today.

My recipe doesn't actually have the German's baker's chocolate in it, but there's nothing stopping you from chopping up this delicious stuff and popping it in your recipe to act as "chocolate chips".


Preheat the oven to 400 degrees F and prepare three 8" round cake pans with pan-spray and/or parchment paper.

Whisk together the sugar, the cocoa powder, the flour, baking soda and powder, and salt in the bowl of your standing mixer, fitted with the paddle attachment. Add your eggs, one at a time, stirring until the mixture is sort of "chunky", and then repeat with the oil. Your coffee and bitters should be the last ingredient, and simply mix until all is incorporated and relatively smooth. Make sure you take a spatula and scrape the bottom of the bowl!

Divide your cake batter into the prepared pans and pop in the oven. Immediately lower the oven to 350 degrees and bake until done, about 45 minutes to an hour. The cake should be wholly set in the middle and a cake tester/toothpick should come out clean when inserted.

Allow the cakes to cool entirely before removing from the pans and attempting to decorate. I highly recommend that you use your pecan fudge icing almost immediately after you make it, so it has time to cool and set on the cake versus in the pan. 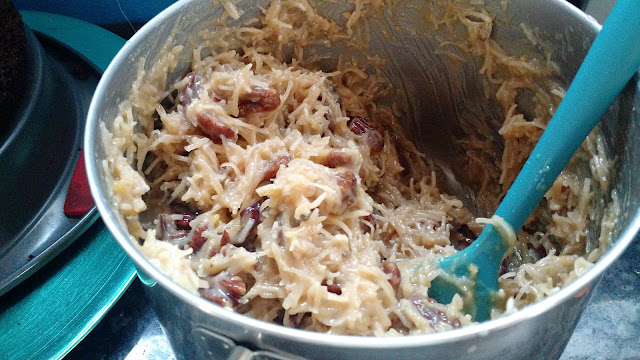 Pecan Fudge Icing
Melt the butter in a saucepot. Add the evaporated milk, the egg yolks, and the bourbon, and whisk over medium-low heat until it thickens, about 10 minutes. Remove from the heat immediately and add in your toasted pecans. Stir well, and add the coconut. Use this icing while it's still warm, spreading evenly between your cake layers, leaving enough for the top.

You can finish the sides with a chocolate buttercream, but I personally think this cake is moist and sweet enough as it is, so I prefer to leave it naked. It looks so pretty and gives such a wonderful Vintage-y vibe that just reminds you of your grandmother in a crinoline skirt. I highly recommend putting this beauty on a fancy ceramic cake stand and taking it to your kid's bake sale. Oh my God the look on Phyllis's face will be priceless when you pop this four-layer behemoth of Americiana on the bake sale table. 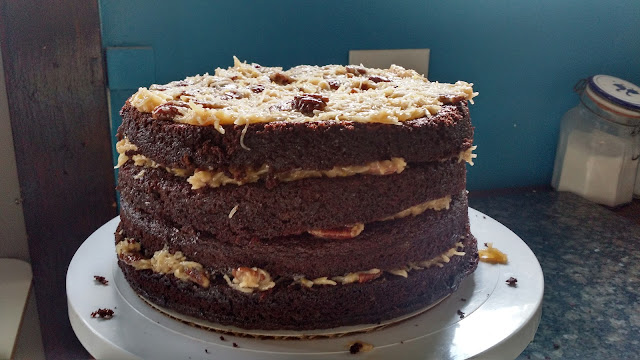 Posted by Wanna B Gourmande at 1:00 PM No comments: