The Corner Restaurant: Water for Ants


I'm pro-breakfast. I've been to The Corner Restaurant once before, and had a vaguely icky experience(more because of the company I was with than the restaurant itself), but I was looking forward to being back. I was crazy-hungry and B. and I decided that if the wait was too long for Sunday brunch(more than 30 minutes), we'd go somewhere else. The wait was estimated at 20 minutes, but only took 15.

We were seated at one of the hi-tops in the "bar" area underneath some exposed insulation and hanging lamps that looked like they were from a really trendy salvage yard. Our server's jewelry was really cool(I remember the gold piercings sort of glimmering through the sunlight) and she was friendly enough, albeit a little slow and seemed a bit distracted.

Many of the newer, hipster-esque, nose-to-tail style restaurants seem to have been jumping on board with this trend that the tables should be set with their own chilled wine bottles full of water, and have teeny tiny water glasses to accompany said water. I have no idea if this is to keep the servers sane while the customers suck down water by the thimble-full, or if it's to give the diner a sense that they're at a friend's house, serving themselves. Either way, I'm not sure I'm a fan of it.

One might argue that the glasses are to portion soda sizes or juice sizes, but it just seems a little ridiculous for a water glass. One might also argue that I'm just a greedy American girl that's used to giant-sized everything and I also have giant hands so everything in my hands look small to me. Either way, it was really annoying when the water bottle became empty halfway through the meal and nobody refilled it. I would have flagged someone down, but it was a busy Sunday brunch, so I think that everyone sort of had tunnel vision, just trying to get through the push.

After a 25 minute wait, I got the farmer's breakfast/Babe's breakfast(pictured above) which came with two eggs, a hash brown, two slices of bacon, and two slices of toast with jam and butter. It was well-prepared, although I like a really soft poach and for the egg yolks to just come sort of flooding out. My egg yolks were, runny, but  poached medium, so the egg yolk remained fairly solid. Am I splitting hairs? Of course. Would anyone other than a really annoying food blogger notice? Likely not.

Another thing was the hash brown. It was kind of like a little hockey puck of potato. It was decently seasoned, crispy-ish, and ate well...it just seemed like kind of an odd portion. It was fine-looking, sure, but I think the unusual shape was offputting. The bread and jam were great(the jam was made by a local purveyor) and the bacon was nice and crispy. I give the dish a 7 out of 10.

B. got the pear pancakes with the cilantro salad. He said the cilantro thing sounded weird, but I really love cilantro so I talked him into it. The pancakes were huge, which seemed odd considering the portion size of my plate, and there were four of them. Four pancakes, all bigger than your face. That's a great value, for sure, but the pancakes had some issues.

For one, those are way too big! If you're going to serve smaller, more refined portions of hash browns, eggs, etc., it seems inconsistent to cook giant pancakes. Also, the pears in the actual pancake itself seemed like they weren't cooked at all. It appeared as if the water in the pears had sort of seeped into the batter and affected it in such a way that they were (tragically) undercooked. When we asked our server if the pears were poached at all before they were added the the pancake. She said she knew they were cooked, "probably sauteed."

A saute is when you cook on high heat with a little bit of fat in the pan. A saute is usually a quick cooking method in which you get some nice color on your items. There were no signs of color on these pears, so I'm not sure how they were cooked, if at all. But the point is that the pancakes were too big, not cooked, and the pears inside(though tasty) weren't really helping. I think that if they sort of were diced up in pretty little cubes and were poached, drained, and then folded into a well-rested buttermilk pancake batter, it would have been better. I also think the portion sizes were way out of control, but I will say it was sort of nice to have pancakes for two more days once they were heated up in the oven.

Another slight annoyance was that our server took forever to get us our check. We were really hungry and ate quickly, sure, but I could see her(and several other servers) cleaning the tiny ant glasses and talking in the corner while we(and the table next to us) were looking for someone to bring them/us the check and clear away the plates. I could hear the couple next to us mumbling about how slow the service was.

I tend not to be impatient when dining out, as I've worked in the industry for over seven years now, so I know how things go on busy Sunday brunches and have empathy for the poor sleep-starved bastards behind the flat-top. I understand that Sunday brunch sucks for the servers and for the cooks. I don't understand why that has to translate to the customer experience. I think I would have been less apt to judge if I hadn't been staring at an empty water glass and bottle for 15 minutes during my nice and salty bacon binge.

Once we finally got the check and got out of there, it had been nearly an hour and a half. That seems long(to me) for a busy place in Westport looking to turn tables and serve customers quickly. Granted, there are people that like a long brunch and want to sit and enjoy their food, savor the conversation... B. and I aren't those people when we're tired and hungry, which we were that morning.

All in all, I like The Corner and I'll likely be back again. But I think it's safe to say that it's a good brunch, versus a great brunch. What's wrong with a good brunch? Nothing at all! A nice, good brunch is a Godsend after a night of drinking. B. and I seldom drink, but there were points that I did have a drunken hangover brunch...and if I was having a drunken hankering for some brunch, this would be the place to be. Being a sober and annoyingly thirsty food blogger, though, I don't think I'll say "this is the place to be" for The Corner Restaurant. I'll say "this place has a good brunch with items from local purveyors, so you'll definitely feel good about supporting them." 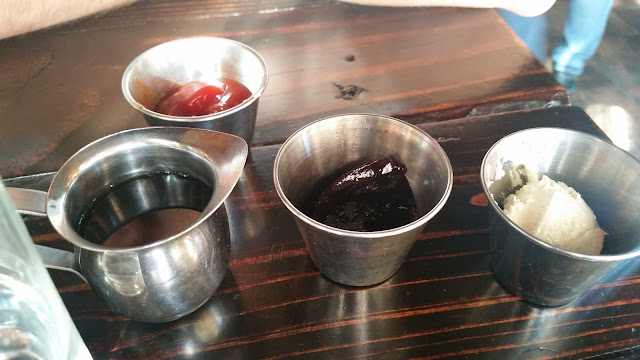 Posted by Wanna B Gourmande at 9:03 AM