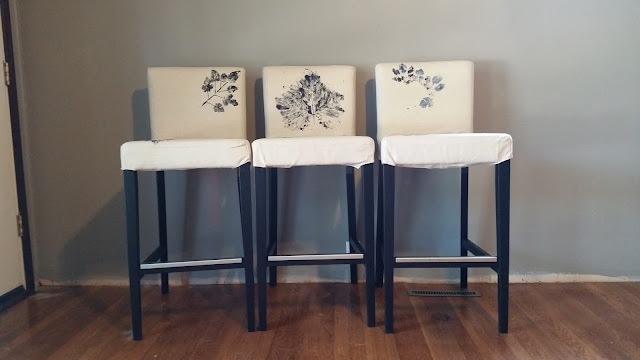 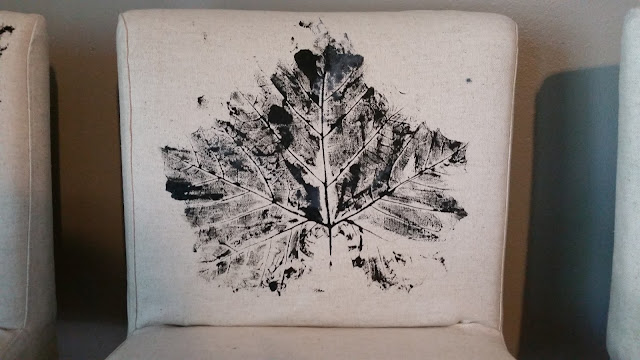 Today, I made these beautiful chairs for my new home. I didn't build them from wood, granted, but I did make prints of these gorgeous and natural leaves, found from trees that are all in my yard, all on the canvas chair covers that we bought from IKEA.

Now that B and I are living together, we've found, finally, the thing we fight about: decor.

It's not that we have entirely conflicting tastes on how a home should look or anything. Actually, we do. We have totally conflicting tastes on how a home should look! That being said, if it's been over a year since we have started dating, and this is our first fight, I feel good about our relationship. It's usually at the six month mark for me that the rose-colored glasses come off and I start to see the other person's pimples. Fortunately for B, his skin is crystal clear; or if it isn't in certain places, they're things that I can easily live with. If he had it his way, we'd be living in a minimalist white-on-white-on-white everything, with clean corners and chrome and bar stools.

We finally settled on high, barstool type chairs with high backs and cloth cushions so my tush could feel plush after a long day in the kitchen. I chose the raw-linen-looking canvas color because I think it looks natural, but still with a very clean design. I had to have something nature-driven and one-of-a-kind in my new kitchen if I'm to make it my sacred space...so I decided on leaf prints.

And why on earth should I go to the local craft store and spend a ridiculous amount of money on stamps when I have an absolute Eden's worth of gorgeous trees all around me?

We have several types of trees in the new yard, and the house is completely nestled in this sanctuary of green. I gently harvested the leaves from each of the trees, using pruning shears, but I'm sure scissors will work just fine, if that's all you have. I did have several bushes and shrubs, but I decided to go for trees, as I wanted to stick to a common theme.

I took cuttings from: 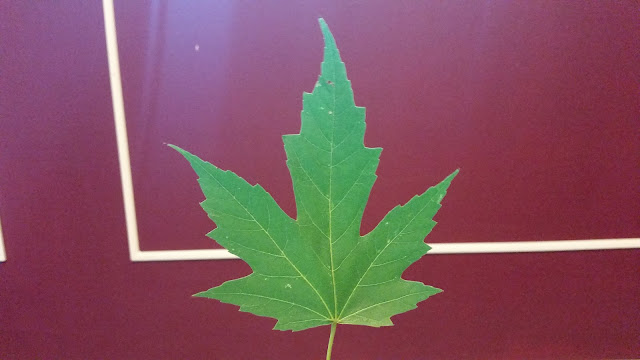 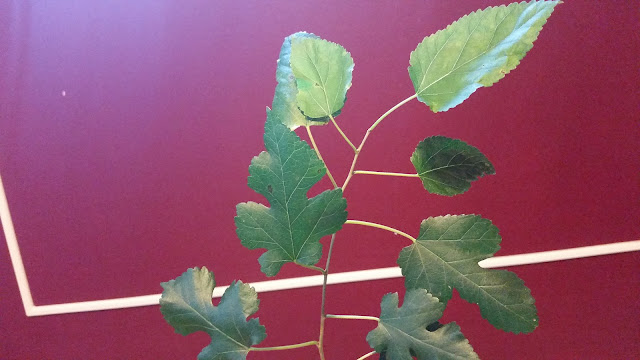 The Silver Maple Tree, which had sprouted its own little hybrid something-or-other off the side... 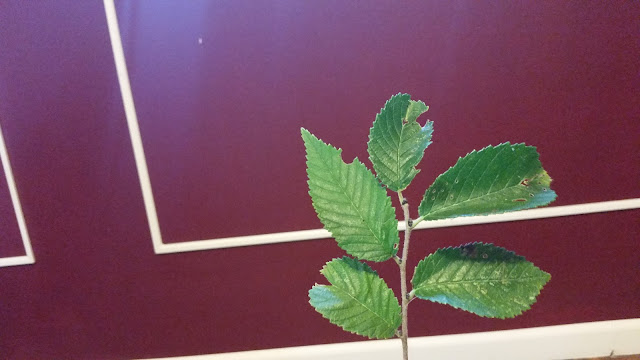 The elm tree, which had this gorgeous little branch that was just barely within my reach... 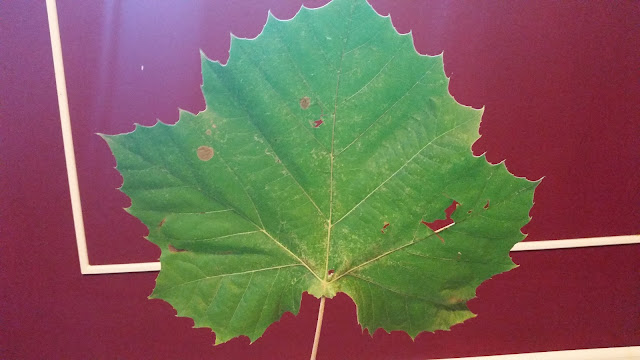 And the Sycamore tree, a most-sacred American tree, which has leaves bigger than my head.

All three of these trees have wonderful and powerful properties associated with them. Maple trees, for example, are very happy trees, that symbolize attraction and longevity. Elm trees are dark and brooding, very powerful for keeping those unwanted spirits away. Sycamores are considered to be Holy trees among certain Native American tribes, and symbolize growth, persistence, and endurance. Not only are these trees powerful and symbolic, but also have gorgeous leaves, and by using them, I could have a one-of-a-kind product at the end, completely unique to my home and area.

I chose leaves that were mostly intact, and that were new and fresh enough that they were pliable. This meant cutting them directly from the tree. If you find a really pretty leaf on the ground, though, I suggest soaking it in some water to soften it before using it as a stamp. This way, it'll be soft enough to not crunch in your hands while you apply paint.

I used black fabric paint and blue dye; any brand will do. The kind of paint I used was actually dimensional paint, thinned out a tiny bit with blue dye, and applied with a small, soft paint brush. My friend JJ, of whom you've heard before, provided me with said dye when she thought it was black paint. Not to be discouraged, I attempted to use the blue dye to stamp my leaves. 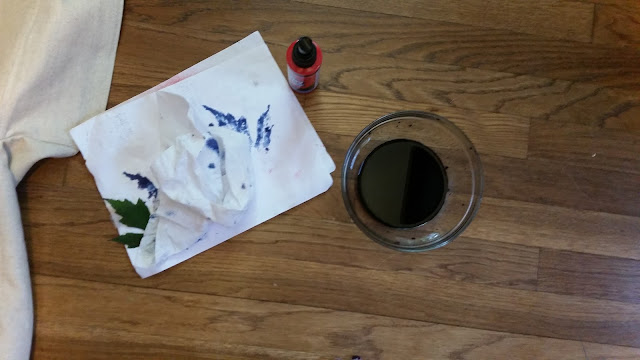 I set the dye in a small glass bowl(metal will do, too, just not plastic) and brought out some sheets of paper. I tested the dredging/soaking method on the papers, saw it worked fine, and tried it on the fabric. Before I did that, though, I put a book underneath my fabric to allow a firm and level surface that I could feel out before deciding where to place my stamp. I pressed the leaf firmly down, using another scrap of paper on top to not only soak up excess, but to allow me to give a firm and even pressure. The result was quite a bit lighter than what I had hoped, but I still really liked the subtlety of the print! 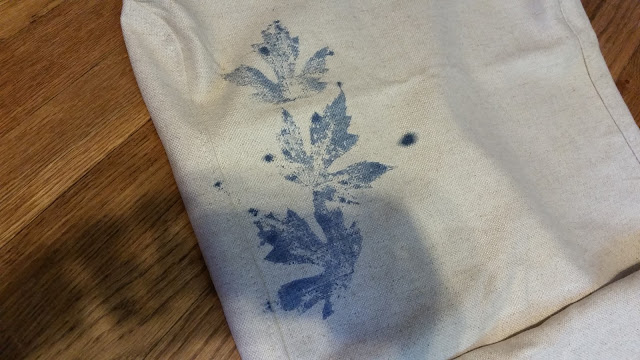 Those are the leaves of the Silver Maple, all pressed down the back of the chair. I kept the design minimal, so as to keep B happy with no busy patterns, and continued on with other leaves, pressing on two more of the seat covers.

Since I had six chairs to cover, I figured two varying prints of each leaf would be sufficient, and leave enough of a pattern. When my friend E arrived at my house, with black paint in tow, we had some real fun with the paint brushes.

When I asked about the dimensional paint, she said she had used it before, just thinned out with water. Since I already had the blue dye out, I suggested using that instead. We set out the plastic packaging in which the seat covers had come as our palettes. We set out scrap paper as sort of 'easels' to paint our leaves on, and to be able to paint over the edges of the leaves without damaging my wood floor. 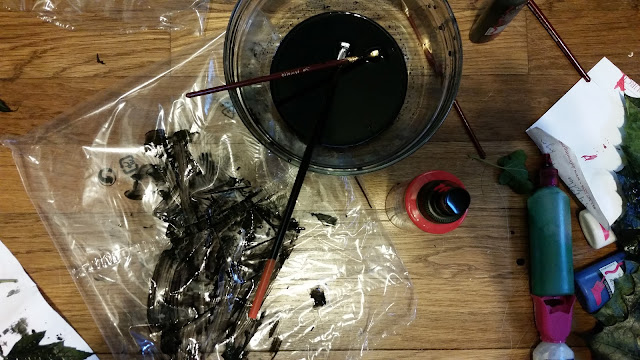 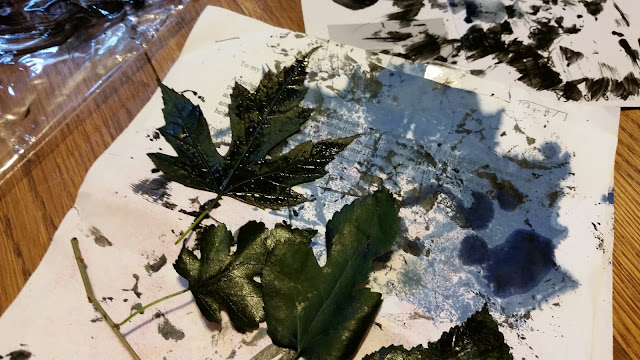 The paint and blue dye worked really well. As you can see, the paint was globbed on a bit unevenly on the underside of the leaf, which made for really interesting textures when finally printed. The paint stayed and made an extremely crisp and clean print, and the places in which the paint had been thinned with the dye actually ended up drying to a super-dark blue, adding dimension. 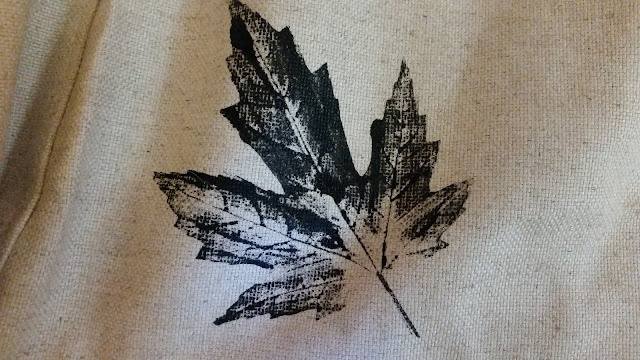 I painted the underside of the leaf, as that was the place that naturally had the textures and veins. I really wanted those lines defined, so I made sure to paint the stems, too. The silver maple turned out beautifully in this print, and you can really see where I went thicker and thinner with the paint.

The elm leaves were smaller, as were some of the maple leaves. I kept those attached to their original branches, and E and I had fun painting the tiny stems. A few of the loose leaves were used to print 'trails' across the seats, to give a more natural look, as if they had just fallen onto a path. 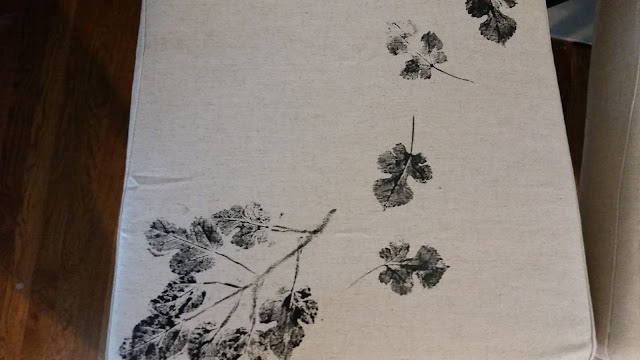 The sycamore leaf was the one that I was the most-excited about. Sheer size alone aside, the veins became more and more apparent the more and more I painted it. I wish I had a larger brush for this particular leaf, just so it wouldn't have taken me so long, but it truly was worth it. 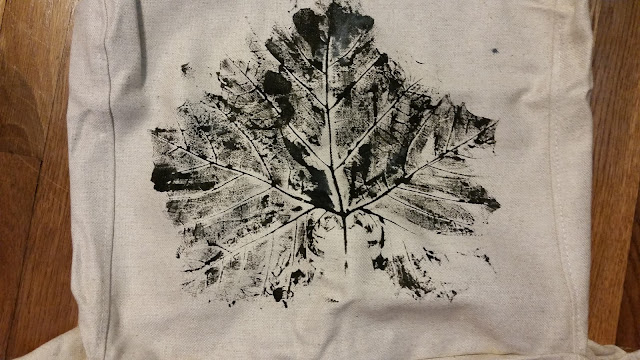 This leaf took up the entire back of the chair. See that spot of blue near the top? That's where I had thinned out the paint a little with the dye. Had I used a larger brush and painted the leaf's underside more quickly, it wouldn't have dried as much. To be honest, though, I'm pretty much in love with this particular print. I used the smaller sycamore leaf print on the actual seat of the cover, right in the bottom corner, so as to offer a little variety. 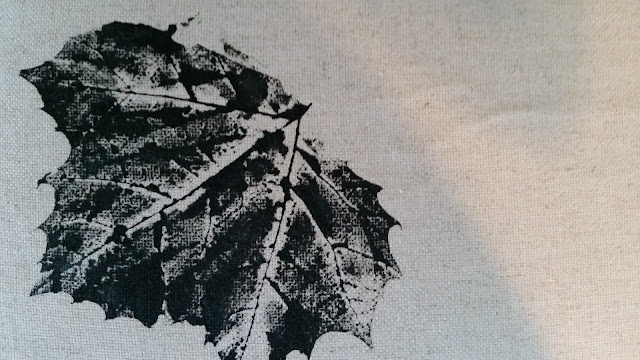 The paint on this one dried fairly quickly, as well, so I globbed it on thick, especially around the edges to form that nice clean line. Remember, even pressure is going to be your friend on this, as well as a smooth and even surface...like that of a paperback book!

When I saw the blue versus the black, I decided to re-stamp the blue dyed leaves with a much lighter layer of the black, much more thinned-out. This way, I could have the color and the nice clean lines. I kept the globbing uneven, and a few of the prints offset just a hair to the left... The result was spectacular. 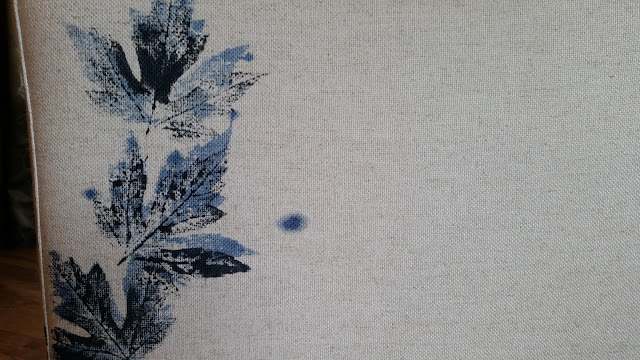 I mean, honestly, look at that. 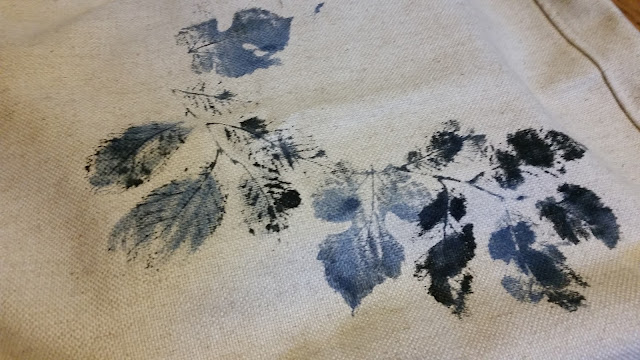 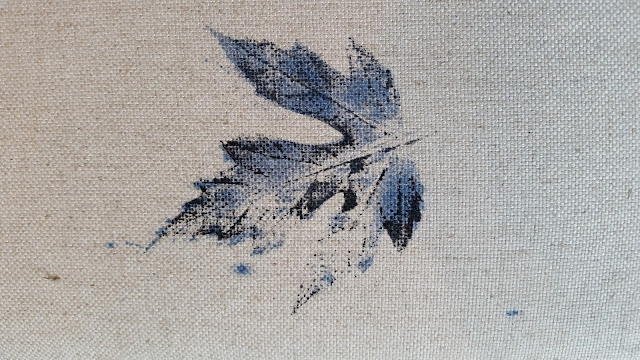 This one just blows my mind... It looks like some gorgeous watercolor masterpiece! 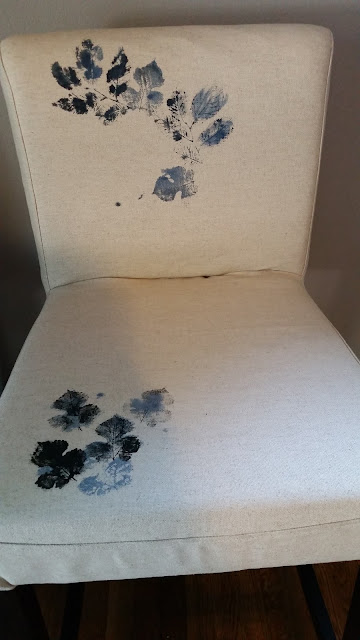 The minimalist and sparse printing plays on the negative space, which allows it to feel cleaner and more precise...yet still natural. I suggest keeping it simple and not cluttering your piece with too many prints.

This entire project took a little more than half an hour with a friend, and was very inexpensive. If you already have the canvas/cushion/fabric, all you'll pay is the cost of the paint, dye, and brushes, which can be under $10, easily. Gather your leaves from outside, from near your house...although make sure you know that the plants aren't poisonous before gathering. 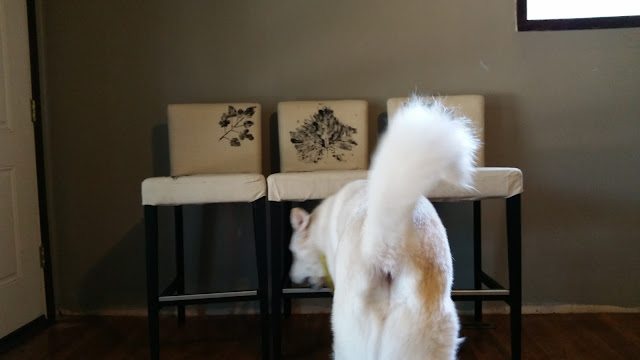 The absolute best part about this project is how fast it is. The paint is such a thin layer that it dries in five minutes or less. It took my friend and I less than 1 hour to complete six chair covers, so imagine what you can do with this technique and a tshirt, pillow case, etc. Imagine all of the different color combinations you could experiment with, as well as different leaves. With this technique, you really can let your imagination run as wild as the nature you got the leaves from. 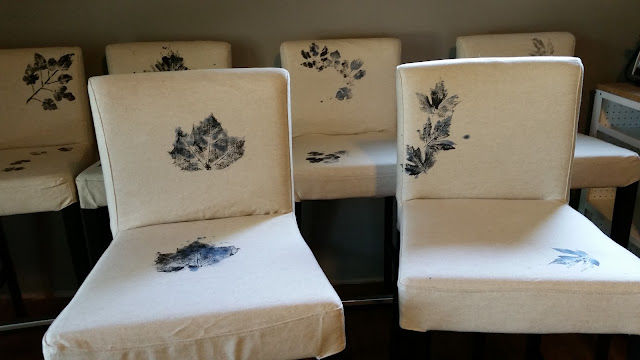 Posted by Wanna B Gourmande at 9:39 PM