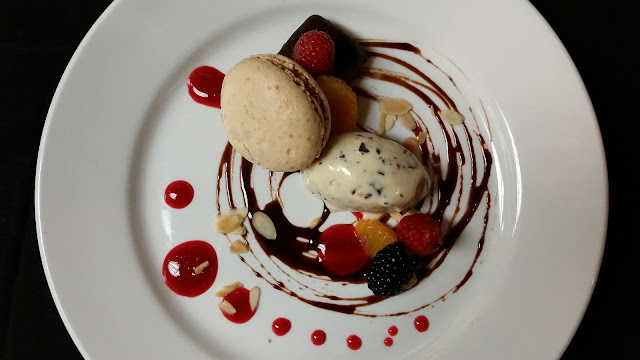 This is going to be a super-brief blog about fancy plating.

Many components go into a plated restaurant dessert, especially if the restaurant is a nice one. This is a dessert I did last night! Check out all of the components. 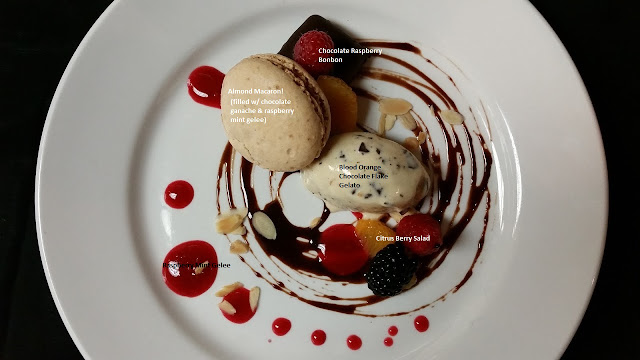 Let's not forget about the chocolate sauce and toasted almonds, of course...

I'd never made successful macarons before, but these ones were really great! They had a shell, feet, and though they weren't the shiniest, they were still tasty. I think I might have over-baked them, or perhaps the oven was too hot, as some of them cracked a little...but otherwise, I'm very happy with them!

The bonbons were my first ever hand-dipped chocolates, and I think they turned out alright for my first try. I didn't have a dipping stick, so I just ended up using an offset spatula. Basically, it's set ganache and whatever other filling you like, cut into little squares, then dipped entirely in tempered chocolate. Yummy stuff! 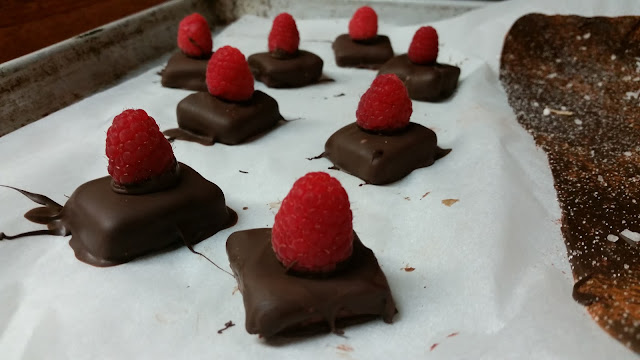 They were honestly a little clunkier than I wanted, but that's going to happen when you don't have a dipping fork. I was able to trim the edges a little more nicely, too, with a hot knife. The added raspberries were a final "why not" touch to give it some more height and color. They were a big hit!

Oh, and the galaxy-looking stuff next to it is a chocolate chili bark that I make using citrus sugar, sea salt, and cayenne pepper. I crushed up some of that stuff and folded into the blood orange gelato for the flakes. Chocolate and citrus are best friends, and you should remember that!

As far as decorating plates with sauces, do that first. You can pick up disposable plastic squeeze bottles for pretty cheap at your local restaurant supply store, or at some grocery stores. If you don't want to splurge on the extra trip to the store, just cut out the corner of a plastic ziploc bag and go to town. Remember that flavors come first, then color. I try not to add unnecessary decorations, unless they're relevant to the dish, so don't put a random sprig of mint on a plate unless mint is meant to be in the flavor profile. My flavor profile for this dish was:

Here's what the plate looked like before the macarons and gelato, which were the heavier items that I wanted to really stand out. 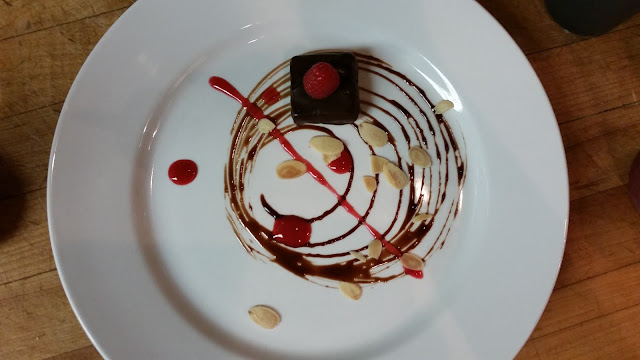 The citrus berry salad came next, then the macarons, and the gelato last. It turned out pretty great! The people were quite happy with the dessert, and so was I. If you're plating a set dinner for a party, just remember: keep it tight, keep it high. Negative space is also your friend, so don't be compelled to fill absolutely everything on the plate. You can feel accomplished, if you just get out there and experiment! Happy eating, and happy plating! 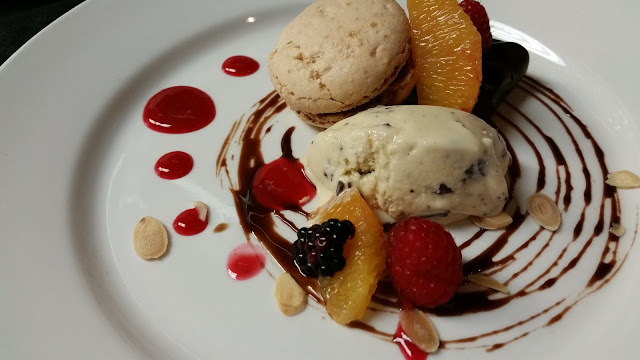 Posted by Wanna B Gourmande at 8:30 AM