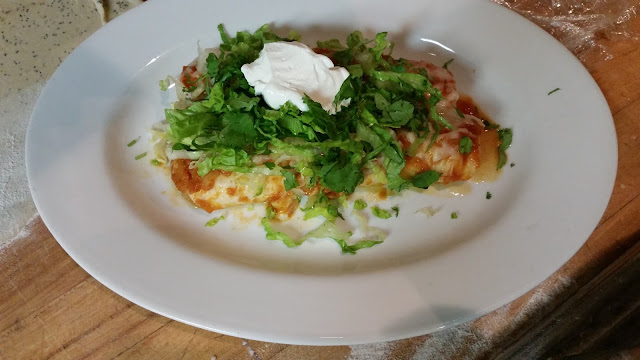 Every once in a while, my restaurant does a Staff Meal. This is often when we are slow enough to make some thing decent, yet all hungry at the same time, which is oddly rare. Many restaurants, especially upscale ones, do Staff Meal, also called Family Meal.

When restaurants close between 3 and 5, often to change up from lunch to dinner, they will sometimes gather the entire staff, back- and front-of-house, and feed them all. This gives everyone a chance to sit, to chat, and take a mental break from whatever kind of spanking they'd had in the previous hours.

Usually, staff meal consists of leftovers from a special, a wine dinner, or even just stuff we have too much of. I remember we had a ricotta-mint pasta, once, when we had made just barely too much ravioli filling that we just didn't want to sell again. This could have been because we either needed to buy more things to recreate it for a special, or just wanted to be done with it and move onto the next, new thing. This ricotta-mint pasta was served with the leftover lamb ragout, which was so delicious, especially  because it had been sitting in its own juices for a few days.

Staff meal is not a right, it is a privilege. Many times, hungry FOH(front-of-house) staff slop up everything they can before the cooks can get in and feed themselves, too. This is some rude bullshit right here, because although FOH makes something like $3/hour, they still go home with exponentially more money than line cooks ever will, and the line cooks work such  grueling shifts already without some 20-something English major whining about how she only got $200 today and slurps up all of the food when she probably won't even finish it.

So, basically, if you are FOH, and you're reading this, please, take light portions first. If you want more, come back for seconds, if there are any; but first make sure that everybody gets a chance to sit and eat. Remember, the BOH doesn't have to feed you. They don't even have to do Staff Meal. This is a nice thing the line cooks do in order for the people they work with to sit down for ten minutes and eat.

If staff meal is just something shared with the BOH, that's even more special. Sometimes, we get to really have some fun and show off to our fellow cooks. Oftentimes, when eating versus "tasting", we are a lot less critical. Honestly, I'm happy whenever someone that's not me is cooking for me. Give me lumpy, leftover mashed potatoes left in the steam bath too long over truffle oil-laced puree any day. I like staff meal when it's just kind of thrown-together with a little bit of love; nothing too fancy, yet well-made.

Yesterday, I had the privilege of having some chicken enchiladas, that were so wonderfully familiar and yet so ethereal. The line cooks even rolled them for all of us working on the back lines, doing the prep, and to the dishpit, too.

I love Staff Meal; it's our way of saying to each other, you matter.
Posted by Wanna B Gourmande at 7:00 AM