Today is the Longest Day of the year, and a sunny and/or sweltering 78 degrees F with a humidity of 85%. Basically, it's hot, muggy, and gods-awful. But when you look out at all of this gorgeous greenery, you can hardly notice!

With Litha being the longest day of the year, we celebrate the here, the now, the fertility of the land. This is a celebration where a lot of Pagans/Wiccans choose for their wedding days, and often choose today as a day of dedication, be it to themselves, their Crafts, or their loved ones. This is also a day to remember that now the days will grow shorter, now the days of summer will begin to wane...so it's very important to celebrate the here and now.

Another reason to celebrate today is because today is Father's Day! How fitting! The celebration of God, the Green Man, the giver of Sun and provider, protector, Father to All...having the same day as this years' Father's Day!

My dad was a single dad for most of my life. He and my mother had me when they were 22, and he fought tooth and nail for custody of me when my parents divorced. It's kind of rare that men get the custody, but he did it.

My dad never married until I was older and out of the house, and never stopped. I remember being alone while he worked, and learning to take care of myself. I remember cooking dinner for us so I didn't have to do the dishes(our house rule: whoever cooks doesn't have to clean). In reality, it was my dad that taught me how to cook, so it's really him that I owe my career to.

I remember him showing me how to cook. I remember him fighting for me, calling out teachers for calling me "Bossy" while the boys were praised for "leadership skills." I remember him telling me that if he had to come into the principal's office because I got into a fight for defending myself, or someone that couldn't, I would never be in trouble. I remember, mostly, him just being there. He was pretty gender forward-thinking when I was a kid; I remember him kind of getting this look of shock on his face when I would say certain things, or when other people would say certain things. I don't think he thought about gender roles a lot, since he's(y'know) a straight white man, so I think having a little brown daughter really woke him up. He told me to fight back, and never treated me "like a girl" because...well, I don't actually know. But he never treated me "like a girl." He treated me like the little person that would eventually grow up into a big person. He was crazy-forward-thinking until he realized the little monster he created(i.e. high school), which was a loud-mouthed teenager that yelled at a lot of boys in her class. Things like "I'M NOT RESPONSIBLE FOR YOUR DUMB-ASS THOUGHTS" or "YOU JUST ACT LIKE THIS BECAUSE YOUR DAD DOESN'T LOVE YOU" or whatever. So, uh, sorry, Dad.

Anyway, what I want to say most is that a lot of single dads don't get the mad props they deserve. Well, screw that!

Here's to you, Single Dads! You're the real MVP! (I'm also really sorry for being so fucking hellish as a teenager. I wish I could give you a medal of honor or a Purple Heart or something to commemorate your achievement.)

An old addage says to plant on the shortest day of the year(Yule/Winter solstice) and harvest on the longest(today). In the spirit of that, and celebrating all of what the God, the Green Man, has given, allow me to say thanks and honor Him by showing the bounty of my garden. Let the garden pics commence! 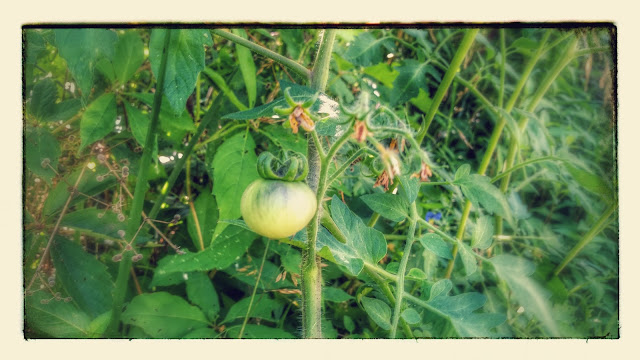 Here's an auto-awesome of my Indigo Rose tomatoes. They're so cute, and I can't believe that I started these beefy mothertruckers from seed! The plants' stalks are almost as thick as my pinkie. I think they'll be ready to harvest in another two weeks. 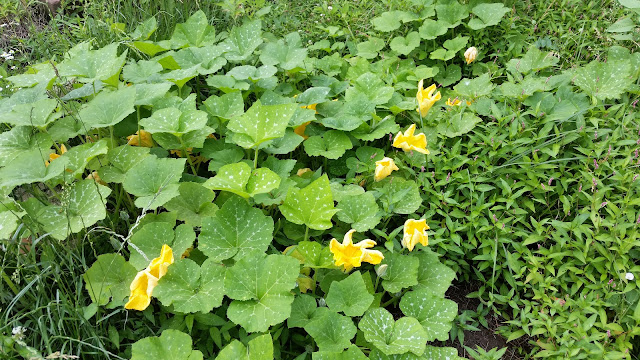 Here's my pumpkin patch, which actually vines out past where I was taking the picture. I don't mind the tall grass so much as it's perfect for the vines to grasp onto. These pumpkins are a mixture of varying types, so it'll be a really fun surprise to see what I get! There are more blooms every day, and bees and dragonflies are buzzing all around the blooms in the early morning! It really fills my heart with joy to see bees... 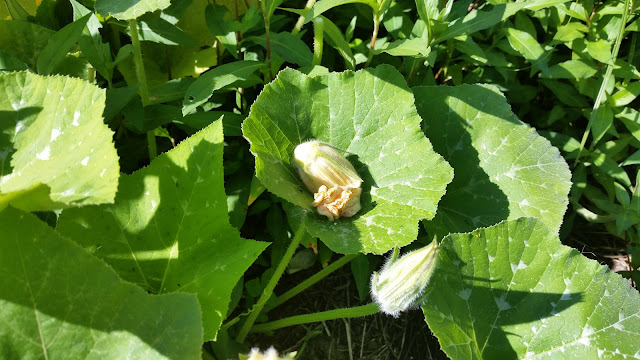 This was too cute! One of my blooms popped off and into the leaf of another plant! It was like a little baby, tucked in it's little faery crib.... 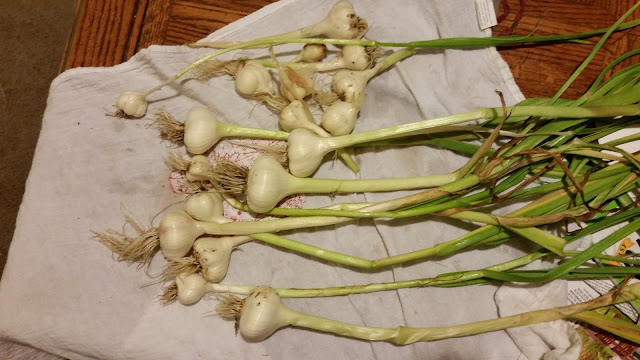 I later went back and harvested more garlic. This was all of it from my garden. This is Spanish Red garlic, and the flavor is bomb! It's like...it's not mild, but the flavor is a combination of taking a nice bite of roasted garlic while inhaling some freshly-tilled garden soil. It's earthy and acrid, all at once. Crazy! 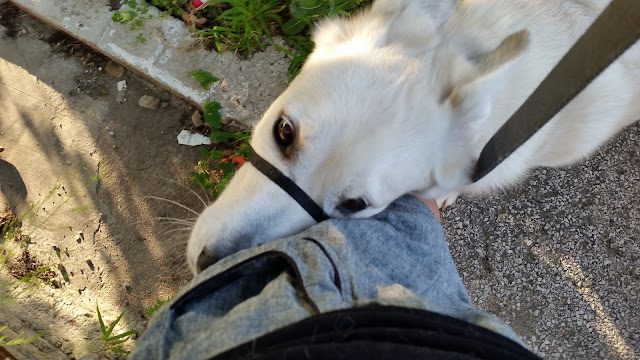 And here's a picture of my dog giving me a little hug, for no reason, other than I just feel the need to document every moment of his existence.

Happy Litha, everybody! Now go hug your dad!
Posted by Wanna B Gourmande at 6:05 AM