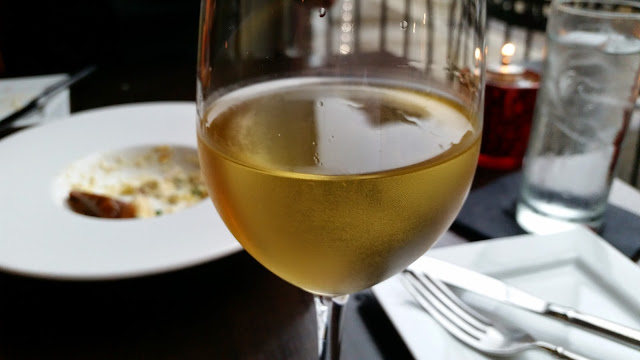 I went to Tannin for dinner last night. It seemed the perfect thing to do after a successful showing at the Gathering of Pagan Souls for Witchcraft and Wellness, for whom I am the official Kitchen Witch! Here, you can read all about it! But more on that later...

It seemed wrong to go to Tannin without ordering wine, so I opted for a sweet gewurtztraminer(say that five times fast), even though I seldom drink. I had definitely heard great things about this little place in the Crossroads, so when B suggested it for dinner on a rainy Saturday evening, I just couldn't say no.

The decor was nice, intimate without being too dark or cramped. We sat by the big bay window and watched as the rain fell down around us. It was like being in a 40s Noir film, and felt very sexy and romantic. When I was little, I would imagine how fabulous I would be as a gorgeous grown-up girl, with my hair long, wearing a pretty dress, sitting romantically across from the man I loved at a perfect little bistro as the rain fell down around us. These feelings were magically conjured up as B and I held hands over our table at Tannin.

The wait staff was attentive without being overbearing, and the tables were small without feeling, well, small. The wine list was, obviously, quite extensive so I can't imagine there would be something there that couldn't work for a person. I am not a wine aficionado, of course; I'm more of a food person. Onto the food.


On the appetizer menu, we decided to split "the Local Pig sausage" while we decided on an entree. It came sort of 'shielding' a really tasty potato salad hidden underneath! The sausages from The Local Pig are always great, and seeing businesses that support them so vehemently are nice. Kansas City truly is the biggest small town out there!


When it came time for entrees, I opted for the chicken, and B got the short ribs. The short ribs came with yummy, garlic-y mashed potatoes and green beans. It was fall-apart tender, but still kept its shape nicely, which is hard to do. It was seasoned perfectly, and he ate the whole thing before I was halfway done with my chicken.

The chicken, though beautifully seasoned, was sadly a little dry. It was flavorful, but it was dry, and swimming in a pan-sauce that really needed to be reduced. It was just a crap-ton of liquid on a plate, albeit tasty liquid, that begged for some bread to sop it up. I actually kind of regret not asking for some....

The chicken came with brussel sprouts and oyster mushrooms, which are my absolute favorite mushrooms ever. There were plenty of brussel sprouts, all yummy and hard-seared, but I really wished that the mushrooms were more aptly presented and not just tossed in. But then B said something:

"Not everyone likes mushrooms as violently as you do."

I love mushrooms! I love them grilled, and I could just eat nothing but mushrooms of varying kinds for a whole meal. I just wanted a big fukken wedge of mushrooms, just grilled, and on a plate......but not everyone likes mushrooms like that. Some people like them just as an accent piece. Some people don't like them at all, so it actually makes sense for the people of Tannin to make it a more accessible dish for people who don't want their mushrooms loud and proud like I do. I almost felt like the mushrooms were hiding in the sauce/broth/stuff, but it was probably perfect to a person who wasn't a total mycophile.

The rain was coming down really hard by the time we finished up with our entrees, and we, like idiots, didn't bring the umbrella. This was my excuse for ordering coffee and dessert, and boy am I glad I did!

What you see before you is easily the best dessert I've had in a long time. It's French toast, made with challah bread, and served with whipped cream. Dear God, was it delicious. I can't even begin to describe how moist yet crispy, soft yet textured this thing was. I just wanted to shrink myself down and crawl onto the bread and snuggle up into a sleepy, sugar-coated slumber on it, and then eat it. The coffee was good, too, I guess. I got a few neat pictures of it. I was trying to get a solid, clear picture of the milk swirling in the hot coffee, but a lot of my photos ended up a little blurry. Oh well. 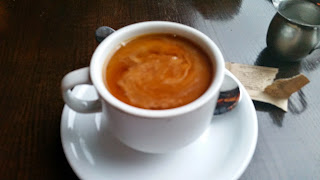 When the rain finally let up, we had just finished scraping the dessert off the plate and were able to pay the check. We didn't have to sprint to the car, which is good, because I was really full, but I did not leave wanting to run away from this place. Rather, I would like to run TO this place. It was a great little bar, perfect for unwinding, meeting friends, having a date night.... I cannot think of a single thing wrong with that place. Even if the chicken was a touch dry, I'll be back. I will be back for the sausage, the French toast, the wine list, the atmosphere...I might just go there tonight, just for the heck of it! Big thumbs up for Tannin Wine Bar & Kitchen!  Great job!

Posted by Wanna B Gourmande at 3:15 PM