Okay, so I'm really  sorry about not blogging, like, at all this year. I've had a crazy year so far! But, here we are, now into the first day of February, and I am ready to blog.

My utter lack of subject matter has caused me to have pause. I finally, however, discovered the perfect subject matter in the form of the elusive macaron cookie. These cookies aren't elusive in the form of "OMG where can I buy these???" You can buy them anywhere ever, now. They're ridiculously popular. The thing that makes these "elusive", though, is the amount of work and skill that's needed for this particularly magical cookie. They're hard. They're hard to perfect. They're notoriously finicky. This was something that I saw as a challenge when I decided to make them for the first time.

There's no shortage of pictures on Tumblr, Pinterest, etc. of these glorious little crunchewy little treat. You see them all around, in bright technicolor shades of flavor, with shiny round tops. I thought that they couldn't be so hard, so I would give it a go. I turned to the most-trusted Chef I could think of: Thomas Keller.

Thomas Keller is arguably the greatest American Chef ever, and he's got this great book out there called Bouchon Bakery, by Sebastien Rouxel, the very talented French Pastry Chef behind it. I love this book because it helps you go step-by-step in great detail of the recipe and what needs to be done. The times and temperatures are precise, and any time a recipe is in grams, you know it's going to be consistent. Look for the book on Amazon.com!

This is the recipe for Thomas Keller's Vanilla Macarons, which I used as the base for my own.

Vanilla Macarons
by Thomas Keller
Blitz the almond meal in a food processor to ensure that it's as finely-ground as possible. Combine the powdered sugar and the almond meal in a sifter and sift into a bowl with a pinch of salt, the vanilla, and the 82 g of egg whites. I used a spatula, and it combined into a nice thick paste. Set aside to let absorb. If you're adding/using a color, add it to this part of the recipe now.

Combine the water and sugar into a heavy-bottomed saucepot and bring to a boil, keeping an eye on the temperature using a candy thermometer. You can also do the "water" test in which you drop droplets into a dish of cold water to see what it does. You're looking for a final temperature of 248 F, or the soft ball stage. When the temperature of the sugar syrup reaches about 210, combine the 90 g egg whites and a fat pinch of sugar in the bowl of a standing mixer and begin to whip on medium speed. You want soft peaks, ultimately, but if you get there before the mixture hits your desired 248 degrees, just turn the mixer down to "stir".
Carefully pour the hot sugar syrup into the bowl in a very thin stream while the mixer is running on medium-high speed until everything is incorporated. You are basically making an Italian meringue, which is ingenious, considering it's the strongest meringue there is, and you need solid bubbles. Turn the speed down to medium and whip for 4 minutes, or until the bowl is still warm-ish but the mixture is basically cooled. Fold the whites in with your almond meal mixture in 3 stages. The final mixture should be quite shiny and gloopy without falling in pieces. It should form a ribbon when dropped from the spoon.

Scoop into a piping bag fitted with a 1/2" plain tip...or just do what I did and use a disposable plastic piping bag and cut off a round end. Even if you're proficient with a piping bag, it is absolutely IMPERATIVE that these little buggers are the same size, as you're sandwiching them. Use parchment paper and a round ring mould to trace the size you need, for goodness' sake. Once you've piped your macarons, give the sheet tray a few raps from the bottom to let air bubbles escape from the top. This will also help create the signature "feet" that macarons need in order to be considered successful.

The recipe doesn't call for you to let them rest, but you really should let the cookies rest on the sheet for 20-40 minutes, depending on the humidity level of your kitchen. The idea is to create a shell. You'll know the shell is formed when the shine on the top is gone and it's fairly dry to the touch. Bake at 330 for 9 minutes. If you have a convection oven, do 300. These bake much better in a convection oven, but I didn't have one at home. The one at work is a high-powered convection oven that baked some great macarons, but the temperature controls were a little iffy, so my second batch ended up a touch cracked.

The first batch I made had the successful texture, but had no feet. I also was a bit iffy since my oven at home is just a standard oven versus a convection oven, so I know what to do for next time. When I made the macarons at work, I didn't have almond meal, so I ground up sliced almonds in the food processor to as fine as they would go. The result was delicious, although technically flawed. These ones had feet, though, so that's a good thing!

Macarons are filled, traditionally, with a buttercream. Thomas Keller's Bouchon Bakery uses a French buttercream, so I used that, too. Look up a good French buttercream recipe you'd want to try, or just use your favorite. Ring the buttercream around the edges to leave a hole on the inside for a filling. You can also use ganache to fill these beautiful cookies, if you so desire. Really, the sky's the limit on these ones. On the first attempt, I left my macarons snow white with a pink buttercream filling for Valentine's day, all with a Bull's eye of crunchy chocolate ganache, which is basically just your favorite ganache with crushed up cornflakes and rice krispies in it. On the second attempt I dyed the macarons pink to match the pink buttercream, and filled the bull's eye with raspberry. Again, the sky's the limit. But I do encourage you to think about compatible colors and flavors.

There are about a million different things that can go wrong with this magical, meringue-like cookie. I went through about four of them, myself, over the last week. I'm sure that I'll continue to struggle, since this is no easy feat. Food Nouveau has the best trouble-shooting guide I've seen thus far, so please bookmark that site, as I have, for your further macaron adventures. 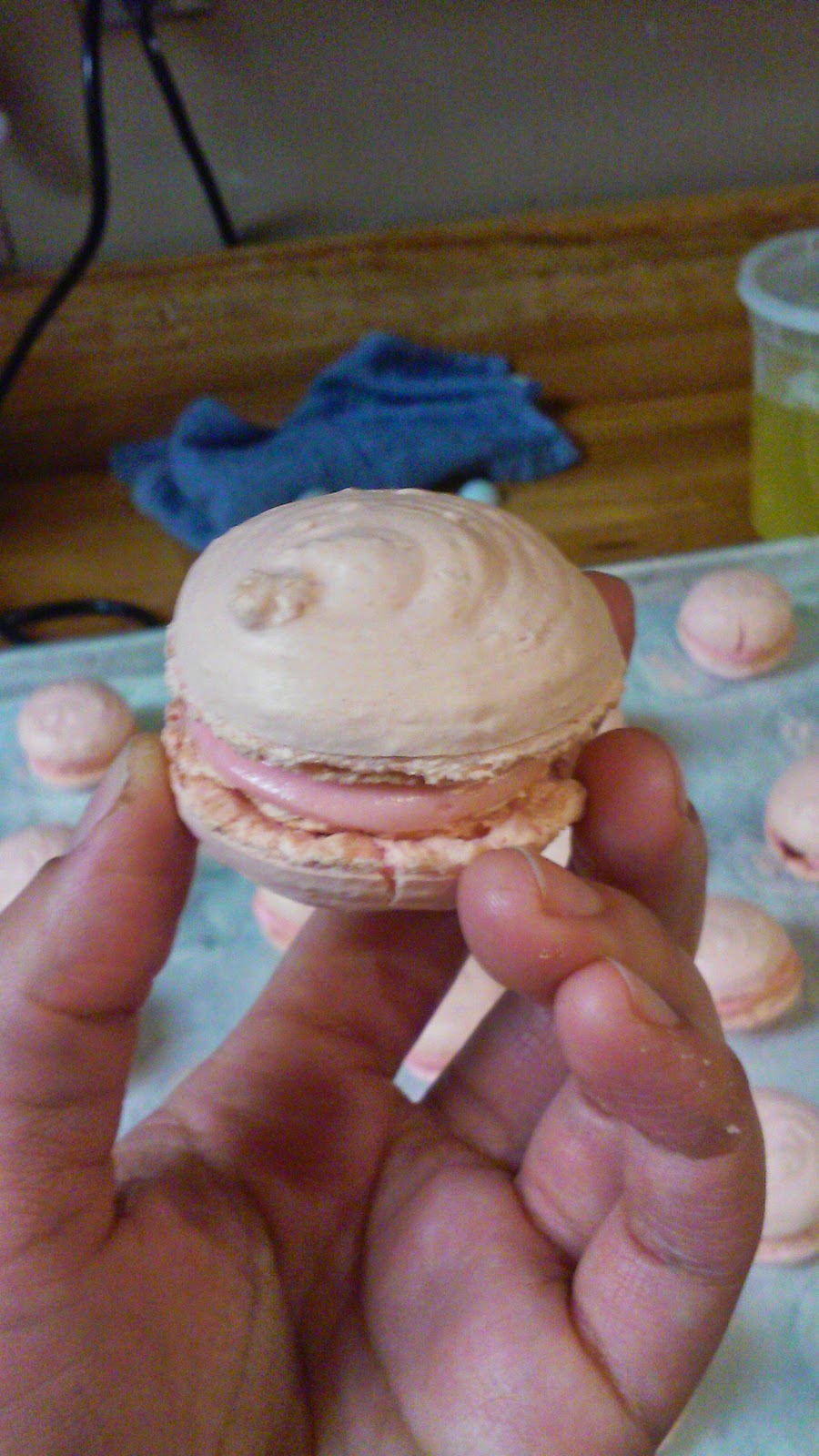 If you try this, please feel free to post your results below! Good luck and happy eating!

Posted by Wanna B Gourmande at 4:10 PM