So yesterday in class was pretty awesome. (Sorry I haven't been blogging as extensively as I should, by the way, as finals are coming up so I must concentrate!) Chef Rush's colleague Nick Wesemann of The American restaurant in Kansas City came to show us plated desserts. It was pretty awesome, since this opportunity doesn't come often to most, especially for such a kickass Chef. You would be hard-pressed to find this good of a Pastry Chef anywhere in the Kansas City area, if not the state.

We knew a few weeks in advance, and I think that I was the most-excited out of my group. Savory chefs and Pastry chefs are an entirely different animal, in case you didn't know. There is a mutual respect between the two classes, one would say, as well as a slight confusion and disdain for the other.

A pastry chef I know once said "Everybody likes pastry, and it's science and art that should be respected."

A savory chef I know once said "Those pastry guys wouldn't know a good steak if it hit them in the face."

While I will not name names, I will tell you that both of the chefs said the respective things are both awesome at what they do. With pastry you can take your time(time is actually something needed for a LOT of things like dough proofing, baking, custards setting, chocolate tempering, etc) and with savory there is often a big rush of adrenaline going on all the time. If I'm wrong, please correct me - I'm just making observations that I've seen so far.


I love pastry. My grandfather was actually a baker for a very long time. He ran a bakery for a very long time in Lake Arrowhead, CA, and the family joke is that his Cinnamon Rolls(which you could smell baking ALL over the tiny mountain town) were the clincher that made grandma fall in love with him. It makes sense, since my grandma had been a widow for a long time before she and grandpa met. I think I was three or four when they did meet.

So pastry has always been near and dear to my heart. From Grandpa's bakery to Mom's gourmet cupcake business(one of the biggest reasons I came to Kansas City), I will probably always love it. Come to think of it, when it comes time to take things home from school, I almost always make a dash for the sweets first. I guess it's lucky that nobody in my group really 'likes sweets that much.'

Anyway, Chef Rush sent us all of the recipes we would need for the plated desserts. They were the Iced Mango Lassi, the Smoked Strawberry Pie, and Black Forest Cake. We have three groups and each group picked from those which they wanted to do. I was immediately excited for the smoked strawberry pie, so we got that one. We actually were lucky enough to get a big Doc file of ALL the recipes.

I was super-excited to have all of them, and when I sat down to copy them on notecards for school, I noticed something odd:

No bake times. No temperatures. Simple directions such as "Creaming method" or "Combine all and cook". Most pastry chefs I've learned from have been extremely meticulous and OCD about directions. They usually will walk a person step-by-step through each recipe, because baking and pastry is a science. The next day when Nick came in, total beanpole, all arms and legs(and really hot), I found out:

"I actually started out as a Line cook. I'm not a classically trained pastry chef. I don't bake breads at all, it's just not my thing."

Well that explained it. It's actually brilliant if you think about it - savory chefs notoriously write their recipes in weird ways(at least the smart ones do) for one basic reason: Job Security. If someone can't understand your recipes, then that means YOU have to stick around to make delicious food! Makes sense, no?

So we got started doing our desserts. Each plated dessert had, like, eight different components on each plate, but here's the fun thing:

"Instead of doing ten different flavors and confusing your diners, pick, like, three or four main flavors and think to yourself: "Okay, so how many different ways can I showcase these?""

So, for ours, the components were:

Sure, it's a lot for ONE plate,  but remember that The American is mostly prix fixe(which means fixed price, coursed-out menus that come in six or seven different courses) that has smaller portions.  Our basic flavors, as you can see, were strawberry, vanilla, and honey. The neat thing about all of Nick's recipes is that they are easy and fun things to do. The Instant Angel Food Cake, for example, is baked in a microwave. A MICROWAVE!

It's not what you think. You basically take the batter and put it in something called an isi canister, which you charge with N2O(the same stuff whipped cream cans have) and it instantly "whips" it. You do get super-big bubbles if you don't let it sit for awhile in the fridge, so it's best to let it hang out for awhile for a finer cake result. Once it's ready to use, you pop it in a plastic cup(he likes it because you can just tear away the cup and not worry about the cake too much) and microwave it for about 25 seconds.  It comes out, amazingly cooked, and the neat thing about it is that it doesn't stale as fast, nor does it get that weird pellicle that some things get when cooked in a microwave.

A lot of the things in the desserts are sort of unexpected. Smoked sugar, agar agar, burnt milk... It's a deconstructed strawberry pie with flavors and textures to really give you an experience. It wasn't just our dessert that had all the fun components, either. The Black Forest Cake had chocolate cake, milk chocolate cream, sour berry jam, vanilla sauce, cocoa nib streusel, blueberry whip, iced sweet cream(an ice cream!), torched cherries...

It's all sorts of delicious fun. It's like all the awesome things that a black forest cake should have with a new look. Revamped. Deconstructed. WOOT! 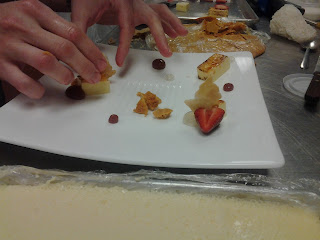 Anyway, what I really want to say about this blog is that pastry is an exciting and accessible thing. It can be beautiful and fun, and have a bit of a sense of humor. I think that pastry can  be exciting and you don't always have to plate compact and high.

Notice the platings on the desserts. Notice that they're sparse and kind of not so 'perfectly' placed. Ever hear of wabi-sabi? It's about finding beauty and harmony and perfection in things that are imperfect and natural. Everything that Nick plated that day was just on the fly. He just kind of picked things up and put them where they went. And that's okay! Not EVERY space has to be filled(something that 1st year culinary students often freak out at) because negative space provides an extra element. It's that extra want of something more.

Did I get a chance to plate something fancy with this? I SURE DID! And here's my attempt: 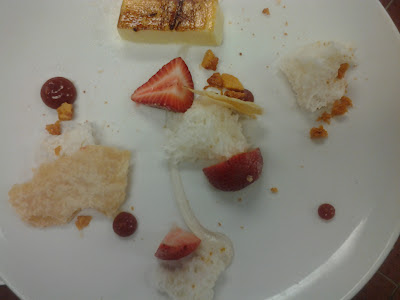 I've never actually plated anything like this before. All the components are on the plate and kind of sparsely strung and flung about. I used to think this kind of plating was pretentious. But now I get it! It's just...fun. It's rule-breaking fun! It's about joy and giving your guests a bit of a 'wow' factor in an unexpected way. And isn't being American just that? Not playing by the rules and forging our own way? Sure, while it would be SERIOUSLY awesome to go to France and become a Pastry Chef there, if I end up as an American Pastry Chef someday, I think I'll be cool with it.