Can I Eat This?

This is really dumb, especially considering I seem to be either suffering from a cold or some weird-ass food poisoning from the donuts in the gas station this morning, but I honestly think that everything I see I immediately wonder: "can I eat that?" Perfect example:

Several months ago, Bing.com's featured image that day was on the Nautilus, which is an ancient sea creature that still exists today. It's really cool looking. In fact, here: 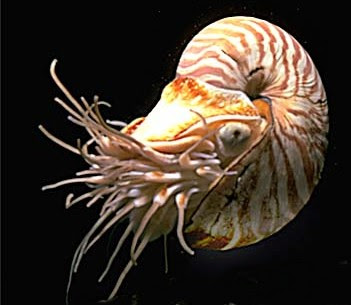 See that? That is one cool-looking sea creature.

I remember seeing that and my first thought wasn't something normal such as "Oh wow, I can't believe that exists on the same dimensional plane as me" or "I wonder where you could see those things locally? At a museum? An aquarium?" No. My first fat-ass thought was "Can I eat that?"

I call myself an honorary Fat Kid for that. And let me get one thing straight: I don't like those bloggers that make fun of the overweight. I don't make fun of overweight people or plus-sizes or anything. I make fun of FAT people. What's a FAT person, you ask?

As much as babies kind of freak me out, let me go out on a limb and say that babies are pretty cool, because they learn much more from sensory stuff versus what we tell them to do. They don't understand language yet, but their little brains are veritable sponges that just suck stuff up. My baby sister AJ learns by holding a toy in her hand, feeling it, banging it against the table to see what kind of sound it makes, smelling and then tasting it. In that respect, I see myself as quite infantile. Instead of using common sense and going "Hey, maybe a gas station doughnut isn't that good for me", I just figure "Hey they put it here. I must be able to eat it." So I just grabbed a blueberry doughnut without even thinking about it.

I mean, I was kind of feeling under the weather when I woke up this morning, but now I just feel blaarrrrgh. It's my own fault, really. With food poisoning you just sort of take it as a gamble, eating that questionable food. Being a Culinary professional, I know the risks of holding food at certain temperatures and dry storage and preservation and all that jazz--but there will almost-always be a risk of eating something nasty amongst all the good stuff. But you've got to eat, right?

So I am on a constant search for different foods and different flavors. Sometimes when I eat something, I categorize their flavors in my own Brain-located Filing Cabinet. I'll think to myself as I'm eating a Caramello caramel "nutty, buttery  mouth-feel, smooth and sweet, super rich". As I'm eating a bowl of chili from work, I'll count the ingredients and sort of crack the code as to what's in it: "tomato, onion, a hint of garlic with salt, pepper, possibly MSG..."

I think I justify it as me trying to constantly revamp and reinvent my palette. I can kind of do a neat thing now where I see something and by knowing what sort of food 'family' it's in, what it eats and where it comes from I can take a guess as to what it would taste like. Like the frog's legs from Mad Jack's in Kansas City. I'd never had frog's legs before in my life. But I had a feeling it would taste muddy and stringy, based on the muscles on a frog's leg and its diet of bugs and stuff in the mud. Upon actually tasting it, I found it tasted like chicken...that was muddy and stringy. But at least I tried it.

I bring this up because I've been thinking about something: weird foods like pineapple, marshmallows, sugar and corn. If you think about the raw products these things come from, they don't seem that appetizing. Like, if I was some wild bushman out in the wilderness dealing with my new set of thumbs and what to do with them, I don't know what thought process I would go through when I saw that spiky pineapple sticking out of the ground. I don't think my first instinct would be to go "I should eat that." But it might. And we never would have discovered we could eat tasty things like pineapple or coconut or corn or anything like that if some crazy person hadn't have gone "Hey I should eat that and see what happens."

Food for thought.
Posted by Wanna B Gourmande at 2:45 PM