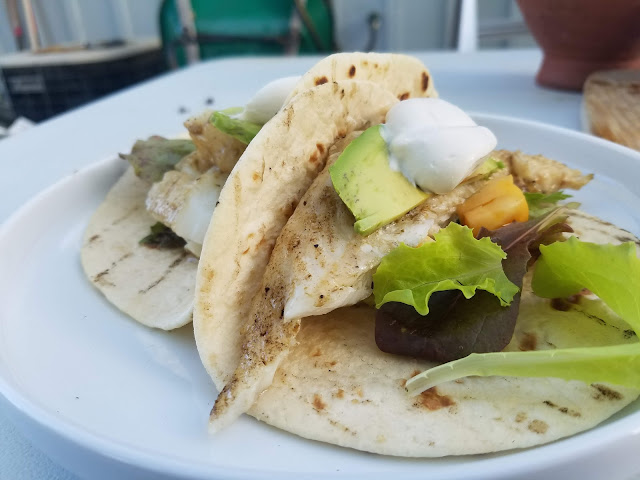 Summer is nigh and so, by default, grilling season. Nothing is more fun than cooking outdoors. There's just something so wonderfully unfussy about forgetting the kitchen and bringing a cutting board, a paring knife, a spatula and a pair of tongs out to a fired-up grill.

Last night, my husband and I spent the entire evening on our garden patio and enjoyed the sun, the breeze, and the grill, and didn't step inside. We enjoyed ice-cold cokes, fresh guacamole, and the joy of grabbing herbs and lettuces from the garden just next to the patio. To say it was an ideal night would be an understatement. A quick tip or two about being/prepping stuff outside:

Take all that you need out to the patio table all at once so you don't have to keep on going in and out again. Bring your garnishes, bring plenty of spoons, bring your serving plates, etc. This way, you can enjoy the outside and relax. All I had was a cutting board, my mortar and pestle, and a few other odds and ends. It was great! There are, of course, a couple of things you'll want to do ahead of time, such as marinating the fish, but otherwise you should be good to go.

Why orange roughy for tacos? It's delicious, has a big flake on it, and is buttery and mild. It was also on sale, but please be advised that it's massively overfished and you shouldn't eat it constantly. It's okay every once in a blue moon, but otherwise I like to stick to trout. In fact, trout is my favorite fish to cook at home! Tonight was a special occasion, so I chose this one. You can substitute for cod or artic char, of course, but since it's a nice night, I felt like celebrating.


Guacamole
(please make in a mortar and pestle or molcajete)
Pop your fish filets in a metal bowl, add oil, and sprinkle generously with salt and pepper. Take your lime and zest it, adding zest to the fish. You don't want to add the juice, because the acid will cook the fish and therefore destroy your need for the grill. Besides, you'll need the juice for later! Layer your mint and oregano leaves on top of one another and then slice as thin as you can. It helps to roll it up in a sort of cigar for slicing! This is called a chiffonade. Add this to your fish, and then gently toss. Go ahead and light the grill, now. I like a charcoal grill, but if you have a gas grill, go ahead and use it.


Beautiful smoke rising - 😁 the steaks are coming up to room temperature and I'll be grilling the freshly plucked carrots🥕🥕🥕 from the garden as well! 🌱 There's nothing quite like grilling in summer... and I've got watermelon chilling in the fridge, too! 🍉 #foodiechats #wannabgourmande #foodblogger #cheflife #grill #smoke #summer #KansasCity
A post shared by Chef Kolika (@wannabgourmande) on Jun 14, 2018 at 5:24pm PDT

If you do have a charcoal grill, I highly suggest investing in what's known as a chimney. These guys run about $10 at any hardware store, and will have your coals hot in under 15 minutes. There's much less waste of charcoal, and you don't have to use lighter fluid at all. Bless!

When your coals are gray around the outside, dump them out of the chimney and pop on the grill grate. I wait about 3 minutes for everything to get hot, and then go ahead and start. Let's start with the guacamole!

Take your tomato and cut it in half, crossways, not long ways. Reserve one of the halves for dicing to top your tacos, but take the other half and pop it in the middle of the grill, cut-side down, where it's hottest. Next, take your lime that you've zested, cut it in half, and throw both of those sides on the grill. Ready for more? Go ahead and cut that jalapeno in half, longways, and let it hang out on the grill, skin side down. While these cook, pop a generous amount of salt and pepper into the bottom of your mortar and pestle along in with the crushed garlic and cilantro, if you're using. Crush and grind them until they form a paste.

When the jalapeno is charred well, remove from the grill and scrape off the skin with the back of your knife before roughly chopping. Add this to your mortar and pestle and give it a few grinds. Do the same with your now-cooked tomato half, and then take one of the halves of the lime and squeeze all of that delicious roasted juice out into your mix. Push the other half of the lime to the far side of the grill, to the perimeter where there's just enough heat to keep it warm.  Add the flesh of your avocados and grind. You're wanting to scrape the sides and crush it gently so as not to let everything fly out.


Next, you're going to want to warm your tortillas. I use flour tortillas because I hail from Southern Arizona, also known as Northern Mexico, also known as the Sonoran Desert. In the Sonoran region, wheat was the most-common cereal crop instead of corn, so it's quite normal to see flour tortillas being used instead of corn tortillas. Simply warm them on the grill, just enough to mark them on each side, then stack them between two plates (one upside-down over the other) and wrap that with a tea towel.

You're ready to grill your fish! I suggest using a spatula since orange roughy flakes quite big, and if you use tongs you threaten tearing the delicate fish apart and letting it tragically fall to the coals. You've marinated them using oil, so I doubt you'll have issue with it sticking, especially if your grates are nice and hot.

Grill on the first side for 3 minutes, and then flip for an additional 90 seconds to 2 minutes, or until the fish is firm and flaking apart. Fish doesn't take long to overcook, so please stay close! To finish, take that grilled lime half and squeeze it all over your fish as it's finishing cooking on the second side. The flavor of roasted citrus is one of my favorites, and I suggest you use it, too!

Transfer onto a plate and serve. You can break apart the fish using the spatula, or make it super-informal for you and your dining partner and eat with your hands! A third of the world uses a fork and knife, while one third uses chopsticks...and the final third uses just their hands to eat with. Toss out those old stuffy Euro-centric ideas that it's not a meal if not eaten with a knife and fork and get messy. The fun of tacos is that it's partly a mess! 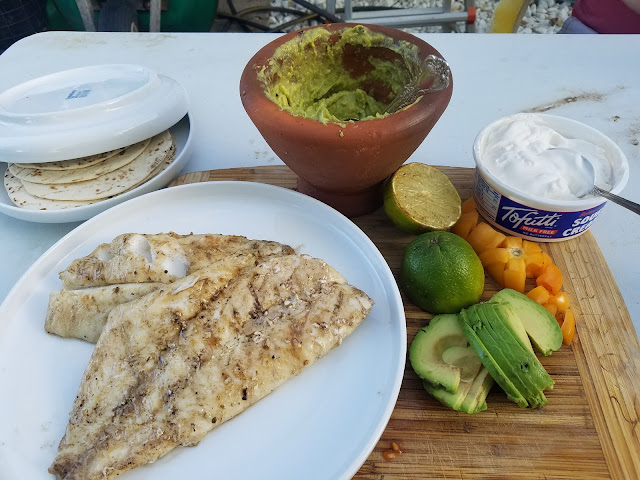 To assemble the taco? Oh, sure.

I put down a thin layer of guacamole first with my spoon, then the fish. Then tomato, garden lettuces, avocado slices, a little smear of sour cream and some roasted lime juice. Delicious and easy! You, of course, can put whatever you like on the taco, but this is how I do it. If I'm having it with cheese (or vegan cheese-like product), I always put the cheese on the bottom before anything else. This way, it creates a barrier and my tortilla doesn't get too wet.

Thanks so much for reading. I hope you enjoy your meal, and remember that the only reason you have tacos is because of Mexico and the incredible culture that developed there. Happy cooking and happy eating!


Fish Tacos 🐟🌮 In celebration of the Mexican army's victory against the French Empire in 1852! Because we Americans love to celebrate it. 🤷🏻‍♀️ Orange Roughy filets grilled with lime, #garden herbs and lettuces, and #guacamole! 🥑 . . . . #taco #cincodemayo #immigrantsmakeamericagreat #wannabgourmande #KansasCity #pescado #foodiechats #dairyfree #pareve #kosher #grill #spring #tacosofinstagram
A post shared by Chef Kolika (@wannabgourmande) on May 5, 2019 at 6:18pm PDT

Posted by Wanna B Gourmande at 2:56 PM