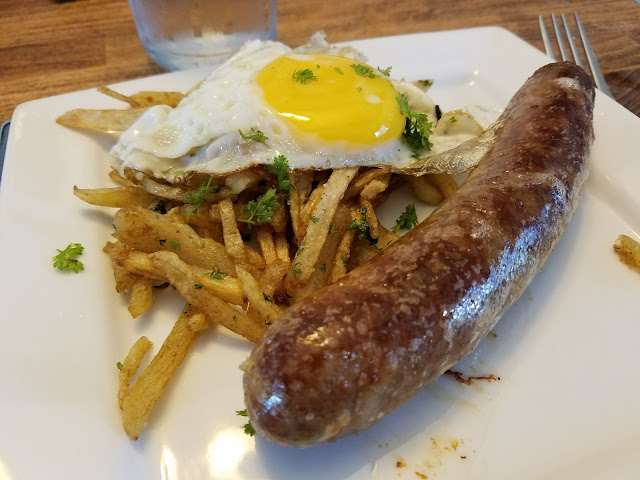 Look me in the eye and tell me that fries aren't amazing. America is the only country I've spent considerable time in, and I know that they're a staple here, but they're definitely a staple in many other parts of the world. From Canadian Poutine to American Chili Cheese Fries, we love us some deep-fried starch. I knew that they originated in France, so imagine my excitement when I learned that making them was going to count as a traditional French dish in culinary school. I thought "I get to actually focus on fries for school? I was so excited that I started dreaming about writing an essay on fries, knowing that I was going to tear it up. Tragically, I didn't write a thesis on fries (my thesis was on American Regional Cuisine) but I still remember learning to make them.

Now, there are several different preparations and all yield different results. Everyone has their own opinions on which potatoes are best, whether to blanch or not, whether to soak or not, whether to freeze or not before frying. I'm going to show you the simple method that I learned in culinary school and you can go from there. Cool?

Here's one thing before we start:

While there are over 4000 different varieties of potato, they can be sorted into two categories: waxy and starchy. A waxy potato will be the yellow or red kind you might find at the grocery store, with skin that's quite thin and that peels easily away after boiling. A starchy potato is, well, rather starchy and stick-to-your ribs, your standard Idaho potato, which is often the chosen kind to use for baking and for pasta applications. Gnocchi, for example, are often made with starchy potatoes. A lot of folks like to use the starchy kind for mashed potatoes as well as gratins. They're sturdy, and that's why I personally think that they're the better kind for fries. That being said, I've seen Gordon Ramsay make a Chip Butty using waxy potatoes, called desiree.

Pomme Frites
yields enough for 2 people, or just 1 if you're feeling a tad hangry 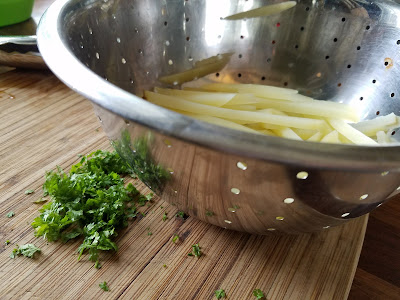 Fill up a medium saucepot with cool water. Take two starchy potatoes and peel them, making sure to compost the peels, right along with your coffee grounds and your eggshells. Use a knife to slice thin batons of potato, a little bigger than 1/8" of an inch. You can do 1/4", if you like, just know that cooking is going to take much longer. It doesn't matter what size you choose, so long as your batons are the same size. Place them all in the pot and use your hands to swirl them around. See all of that cloudy white stuff? That's the starch. Drain the water and fill it up again, swirling and rinsing until the water is clear, then bring up to a boil. Since they're so thin, they barely need to cook for more than 1 minute before you take them off the heat and drain them. Lay them flat on paper towels to let dry out a bit while you bring up your oil. Do not have wet fries when you put them into hot oil; you will make it splatter up and you will get hurt. Seriously.

Protip: Use a bigger pot than you think you need. Seriously. I use my 4 qt stock pot when I'm barely going to be using a quart of oil. Oh, and let's talk about oil while we're here!

See, no two oils are alike. There's such a thing as smoke point, which is just a fancy way of saying "hey this is really hot, all the water that was ever in here is now 100% gone and the flavor profile of this is now changing because it's cooking a bit too high. It might catch fire if you keep it going. For real. Because like, I'm oil. And I'm hella flammable."

I use the lard that I render from beef, combined with coconut oil. This is because it's just the fat that I have in the jar in my fridge. Yeah, I have a dripping jar. Yeah, I reuse it and filter it when I can. It's flavor. So whatever you choose, be it shortening or grapeseed oil, be careful and heat it to 350
degrees F. Make sure that you have plenty of room for expansion, otherwise you could start a fire.

Once your oil is hot, gently drop your fries in and fry until golden-brown, about 4 minutes for me. I drained it by using a slotted pasta spoon (I couldn't find my spider) and tossed with parsley and salt. You can season it with whatever you want, of course, but I wanted to keep it simple.


Serve these fries with a steak, with a burger, in a bowl with cheese and gravy and veggies...the possibilities are endless! Use these fries just as you'd use any fries. They always say that you should eat whatever you like so long as you cook it yourself. So? Wanna eat fries? Make them yourself!

Wanna learn how to make fries at home? It's not as hard as you think. 🍟 Check out my blog post on WannaBGourmande.com to learn how to make this delicious homemade version. It's simple and relatively quick! Perfect to serve with beef kielbasa, or with kimchi and sriracha aioli if you're a vegetarian 😉 #foodblogger #cheflife #wannabgourmande #lunch #sausage #foodiechats #fries #pommesfrites #homestead #homemade #recipe #egglicious #dairyfree #beef
A post shared by Chef Kolika (@wannabgourmande) on May 20, 2018 at 2:43pm PDT

Thanks so much for joining me. Happy cooking and happy eating.
Posted by Wanna B Gourmande at 2:45 PM