Quiche - Not Quickie (But Fairly Quick)

I've already made my New Year's Resolution to be more impactful. What does this have to do with quiche? Not much, unless you count "learning a new recipe that's easily customized to suit many different tastes and easily made ahead and kept all week" being impactful. It'll have a great impact on your life to learn a simple dish like this, and I promise you that you'll not regret learning it.

For this easy quiche recipe, which can be a breakfast, lunch, or dinner item, you'll need a pie crust, ideally of the 8"/9" variety for your 8"/9" pie tin. Make your own? Of course. Can you do store-bought? Of course. Why is the "of course" included in either one? I'd rather you have a fake n' bake quiche than no quiche at all. Just in case, though, here's my basic pie recipe:


In the bowl of a standing mixer, combine your flour and sugar. Cut your fat into small pieces and pop in your mixer. Using a paddle attachment, stir your mixture until it comes together in fatty sort of crumbles/pea-sized bits. Add the egg. If this egg is not enough moisture to bring it all together in a dry sort of ball, add a drop or two of vodka until it does.

The enemy of pie crust is: gluten. Gluten is the reason your crust shrinks from overworking. Gluten happens when wheat meets water, and that's a bad thing for your pie crust! Another reason you want vodka instead of water? The low boiling point!

See, alcohol boils/evaporates at a measly 90 degrees F while it takes a whole 212 degrees F to get water to boil! This is why your pie crust remains with a soggy bottom with your fruit pie, which is likely already chock-full of water as it is! See? Science is cool. Use that vodka...or any spirit you have. I hear Wild Turkey is great for using a crust to make apple pie...

So, now that you've made your dough, turn it out on to a liberally sprayed parchment sheet and smear the dough all across the paper, folding it up and over again, and smearing again, until everything is nice and uniform. This technique is called "fraiser", and it's my absolute favorite to boot!

It's a short video, but you get the idea of smearing with the heel of your hand...right? Totally.

So, for your pie dough, simply roll it out into a nice circle to overlap on your chosen vessel. Instead of pressing the dough into the shell, may I suggest simply laying it down and letting it settle for itself(about 5 minutes) in the pan, so any glutens that may have formed can relax a bit? This extra step will prevent shrinkage, and that is a good thing. 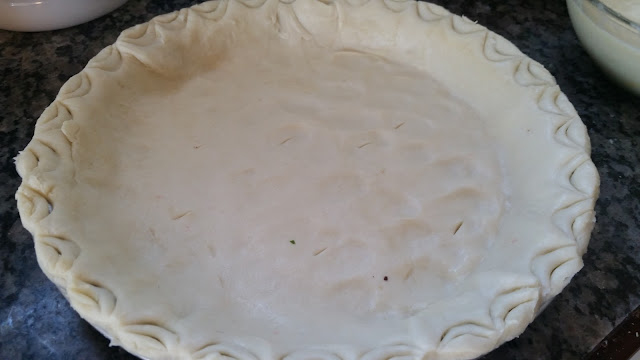 Now that you've trimmed your shell, you can decorate the crust ring. You can pinch, use a fork, or use a spoon to create scalloped edges, like this one here. No matter what you do, though, make sure that your crust goes immediately in to the freezer. You'll want your dough frozen(or near-frozen) for this application, if you can at all help it (which you can).

Now that we've discussed crusts, let's move on to filling. A basic quiche custard is simple, and this amount is perfect for a single 8"/9" pie. What you put in it is up to you! Try not to go overboard or too complex with your fillings, and choose lightly cooked items as well. For example, do not put raw bacon in these quiches, as the results will end up greasy and gritty. I also suggest lightly sauteeing any vegetables you may put in there, as you don't want to ruin the pretty, light custard when you cut into it by hacking a hard carrot or stiff pepper. Remember, this dish cooks in the oven for 30 minutes, and that's it. The custard is not going to suffer because you need to make sure that ham is hot. Understand?

That's it. That's literally it. Beat your eggs with the salt, then whisk in the sour cream until it's thick and evenly all come together, and then whisk in your milk. Isn't that crazy? Add your fillings to the shell, then pour the custard over, and put it on a sheet tray(just in case it spills).

Pop this into the bottom half of a preheated 350 degree oven and bake for 30 minutes. Do you read? 30 minutes. It should take at least this long, but don't pull it out if the middle isn't set, with just a hair of wobble.

Let this cool for at least 15 minutes before you cut into it. The bubbles in this are rather fragile, and if you poke them too soon, the quiche will rupture and a ridiculous amount of water from the eggs will all come spilling out and you'll be left with a gross, goopy mess by the end of it. So, for real, patience is a virtue.

I personally like quiches to be served at "body temperature"(about 90 degrees) with a nice rocket salad and a light vinaigrette, perhaps for lunch. Quiches are great for light dinners, too, when you don't feel like eating a whole plate of spaghetti and meatballs or an entire rotisserie chicken. They're cheap, they're relatively easy to put together, and they can feed a whole family, if need be.


Go nuts with the flavor combinations and make sure you let me know if you come across any great ones on your travels... Happy cooking and happy eating!

Posted by Wanna B Gourmande at 9:14 PM