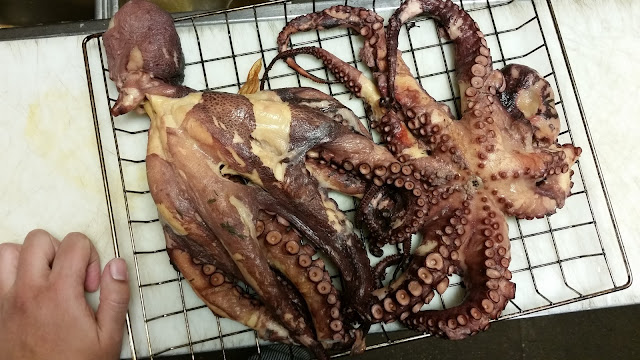 You might cringe at the thought of eating octopus. After all, it's got a rather unsettling look. One might conjure images of Ursula, the Mer-Octopus Sea Witch, coming to life in your stomach. One might just get freaked out by the sight of the tentacles. Maybe you think of the suckers sticking to the inside of your cheeks, or your throat, and you choke? If you think all of those things, you and I are very much alike.

People in China, Vietnam, Cambodia, etc., have been eating octopus for centuries. I hear that octopus is also quite popular in South America/Mexico, but I personally haven't seen it. I admit that I haven't traveled to the far reaches of Mexico and the rest of South America, so I am most-likely not an authority on the subject. What I do know, however, is that octopus is delicious, and the American palette is coming to terms with that and being a more adventurous eater...thank heavens!

Octopus has a fabulously meaty flesh, and is too-often cooked incorrectly, which results in a horribly rubbery texture. As a general rule, more muscle equals more flavor, but it also equals more cooking. For example, beef short ribs take a long time to braise to break down all of those yummy tissues and collagens that'll eventually dissolve with time. Octopus is similar, as the flesh we eat is simply a pure muscle, that's unique because about 3/5 of the octopus's neurons are in its tentacles(which is probably why my mom nearly forced me to eat octopus because she was convinced it was going to make me smart). While octopus does benefit from a quick, high-temperature cook(such as deep frying for tempura), it also benefits from low-and-slow cooking methods, greatly.


If you don't want to watch the Master Sushi Chef Jiro talk about it, I'll just tell you that his apprentices massage the octopus they get for 40-50 minutes by hand, and they serve the octopus warm to bring out its fragrance.It's hard work, certainly, but I'm sure they don't have to ever go to the gym.

I love octopus because octopi are extremely delicious, and relatively sustainable. Of course, offshore octopus fishing has a lot of consequences(like many), but octopi caught offshore are (generally) okay. In general, the octopus is a fast-growing, short-lived species that's thought to be able to withstand fishing practices, particularly in Australia. Octopi mature quickly, but farming for baby octopi isn't so great. There's been a high demand in octopus lately, too, so please make sure you ask about responsible and sustainable farming wherever you get your octopus.

With all of this nonsense and fuss, is eating octopus absolutely worth it? You ultimately have to answer that for yourself, but I personally believe it is. Furthermore, living in Kansas City has taught me what a fantastic method of smoking is! It's simple, it's cost effective, and it makes your hair smell like wonderful hickory! I am vehemently pro-smoker, and I can't tell you what a wonderful cooking method this is for the almighty octopus.

Now, I could tell you how easy it is to just marinate some octopus for a day or so, dry it off a bit and let it smoke for 12 hours, because it's pretty much "set it and forget it"...but only if you have a smoker. Instead, try this recipe for Spicy Charred Octopus from Epicurious.com and post your results below!
Posted by Wanna B Gourmande at 8:24 AM