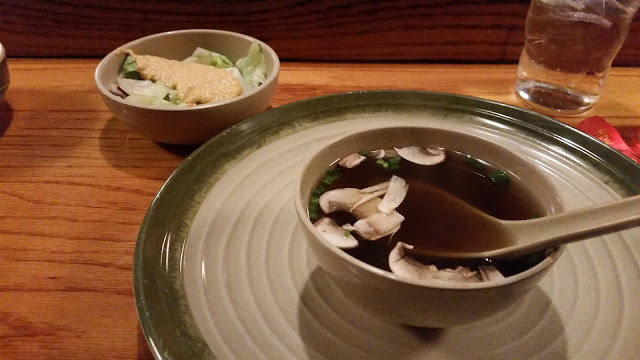 This Saturday, my wonderful boyfriend took me to Shaake's Pumpkin Patch as my official first-ever experience in doing so. We had an absolute blast, and I could not have been happier. Not only did I have my first-ever pumpkin patch/hay ride experience, but got to eat some tasty pumpkin doughnuts as well.

Entering, it's your standard, fun hibachi place. Red walls, lots of open tables, scores of college girls in kimono-esque robes as their uniform. Fun, I thought.

We were seated promptly and our drink orders were taken almost immediately. All six of us got the hibachi, and had a really fun young hibachi cook, who happened to be white. Does this matter when it comes to cooking other people's ethic cuisine? Absolutely not! Your ethnicity has nothing to do with your ability to learn to cook and appreciate other people's cuisine. Sure, there's the ever-so-slight stigma of your hibachi being cooked by the white guy and not the Asian, which I'll admit to. Asian peoples are very sensitive about our cultures, and it's honestly too hard to describe why, because I ran out of coffee filters and don't have the energy to hit the store to buy  more, so no coffee for me. Anyway, race doesn't matter.

Hibachi is more about the show, and far less about the food. We started with an appetizer of a tasty onion soup w/ paper-thin mushrooms, and a nasty-ass salad with bitter-ass iceberg lettuce and chunky-ass spicy aioli. It wasn't my favorite.

The veggies and fried rice were kind of underseasoned, but hey, it was still well-prepared. Hibachi is, again, about the theater, and our cook was fun, in a relaxed, constrained way, doing all of the tricks and jokes and spatula-flips in a chill young dude way. They're obviously trained to engage in the audience and have a cache of jokes. Keep this in mind.

When he was about to cook the meat, he said "smiley face!" and drew a smiley face with oil on the griddle. Then he took the spatula, smeared the eyes of the smiley face to be slanted and said "Japanese smiley face!"

White dude. In front of me, Asian girl, making a slanty-eyed Japanese smiley-face in the oil in front of us. I looked up to see my boyfriend(a white guy) making this face:


And all of my friends(also white) looking at the guy like:

Let me say this: I do not think it was intended to be racist, at all. I think they're taught a script and that they follow it. I do not think it was malicious in ANY WAY SHAPE OR FORM or I would have said something. I heard the other cooks(who were of an ethnic persuasion) say the same thing as I was walking out, but it was still weird. I feel conflicted about it, mostly because he's a white dude and I was the Asian girl in front of him, and living in the midwest is weird for me because it's the first place I've ever lived where I've been reminded of my race from the outside.

It's easy to forget your ethnicity when nobody says anything about it. It's easy to forget a thing like racism exists when nobody is subjected to it. I get why white people in America aren't naturally sympathetic/empathetic to it. I'm not really mad about it or truly offended; it was just weirdly borderline racist, coming from that particular situation.

I don't think I would have been as annoyed with the guy had he not overcooked the steak and smothered the bejeezus out of it with thick teriyaki sauce. To be fair, I ordered the sirloin, which came in strips, so it's really easy to overcook. Also, he's cooking for a demographic that seem to like their steaks more "done" and smothered in sauce, so I cannot - in good conscience - fault the guy for that. I cook professionally, too, so I totally get it. I can't tell you how many times, when people order medium-rare, they send it back to the kitchen when it's "pink in the middle." I understand that it was probably a rare thing for a person to actually mean medium-rare when ordered medium-rare, which is why I didn't say anything at the time. I also just kind of wanted to get out of there at that point.

The food was generally well-prepared, I ate most of it(because I was starving), and it was a really good value for the money. Plus, we got a yummy dessert of orange sherbet, which not only came with the meal, but tasted like the those Flinstone's push-up pops that you got when you were a kid!


All in all, it was okay. It was good for what it was, which was small-town hibachi. Lawrence is not the foodie paradise, and I was very much reminded how fortunate I am to live in Kansas City, which is and is becoming more and more every day a foodie paradise. If you're in Lawrence, maybe try something other than this place. I'm sure they do burgers somewhere really great, and I hear that there are a few bakeries that can't be beat!

I don't think I'll be back; 90% because I don't live in Lawrence, 10% because the food was mediocre. Aside from the borderline racism, though, the hibachi cook put on a very good show, which is really why you go to a hibachi place.
Posted by Wanna B Gourmande at 9:48 AM