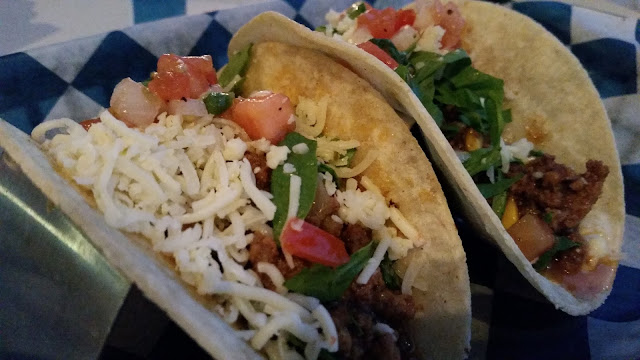 Among the most-stressful times in a person's life, moving from one home to another definitely resides in the Top 3. They say that moving, getting married, and public speaking are some of the most stressful events in life. Fortunately for me, I'm moving to a quiet neighborhood, adjacent to the things  love: food, parks, and the Volker/Rosedale/Westwood marriage. These powerhouse neighborhoods create a vibrant and wonderful incubator for Kansas City's most-trendy people, the yuppies, if you will, and the foodies that come along, too. I'm just happy that we bought the house before the neighborhood value skyrockets.

Right down the street from my gorgeous new house just happens to be Taco Republic, a food truck turned brick-and-mortar that seems to be my own, real life version of the "El Jefe" food truck from "Chef." Although Taco Republic does not serve Cuban sandwiches, it does serve a damn good taco.


Taco Republic on 47th & Mission, a converted gas station, serves with an open-air approach. One wonders what happens in winter, but one is grateful for such beautiful summer nights as these. Beer, margaritas, chips and salsa all welcome you with plentiful and colorful outdoor seating, as well as several flatscreen TVs for you to watch the news, the game, etc. There was a Royals game on tonight, and this little taco stand was abuzz with baseball and tequila. The vibrancy of the atmosphere is fueled by it's decor, which can be described as Austin-tacious. (I can't really explain how this is; just imagine a trendy cool place in Austin where all the college-age kids would go, and it's that.)

Oh, and service was great both times I've been here. (Once our server found out I was a food blogger, his manager made it a point to ask how the service was. I told him that I seldom comment on service, and mostly comment about decor and food.)

The food at Taco Republic could be described as Tex-Mex, but I think that it reminds me of the late night club tacos I would eat in LA after a long night at Das Bunker. My friends and I would clamor in our platforms and jelly bracelets for carne asada tacos with lime at 2 in the morning in some shady East LA shack, talking about how we should probably hit Denny's, too, to get some coffee before we scrape off enough of this eyeliner to be at least half-presentable at work tomorrow. Ah, to be young and in LA...but I digress. 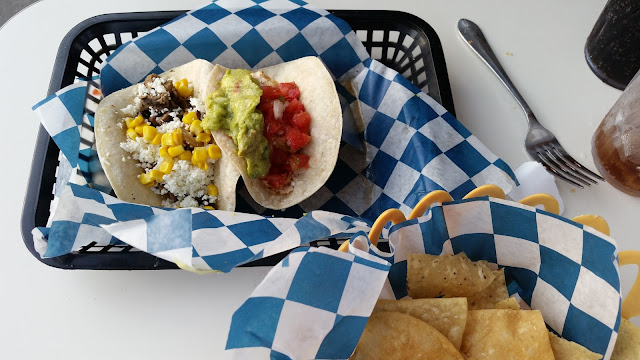 Take the Del Mar(tilapia) and Ortiz(chicken) tacos that B got. Look at the corn, the cotija cheese, the guacamole... The tacos make no assumptions, ask nothing, and aren't pretending to be the next big thing. It's a taco, and it's good. What else do you need to know? It's on a corn tortilla, which is good and authentically Mexican. Tortillas de maiz, as they are called, are considered to be a sign of authenticity in Mexican cuisine. Flour tortillas are more of an American thing, but the Mexican-American fusion of food that lies in the Southwest is so damn convoluted that I don't think anyone can honestly tell what's what and where's where anymore. 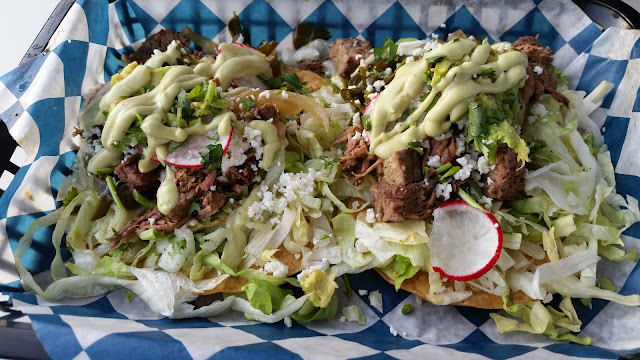 These are the carne asada tostadas that I ordered the first time I ate at Taco Republic. They look appetizing, right? Upon first bite, though, one gets an overwhelming punch of pickled jalapenos, which I honestly found really overpowering and off-putting. I picked as many of them off as I could, but the pickle flavor had seeped into the sponge-like iceburg lettuce that was piled on in a sloppy chop, rather than a nice fine chiffonade like it should have been. I think it could have used a little more radish, and the meat could have been a little more. I think it was a bit light on the cheese, too, but perhaps I'm splitting hairs at this point.

I did not enjoy this dish. They pickle all of their onions and jalapenos in-house, which is great, but I guess I just don't enjoy pickled jalapenos. I like jalapenos raw, sauteed, deep-fried and stuffed with cheese, but not pickled, apparently. So, hey, maybe this dish just isn't for me.

Now, I come back tonight, on the most gorgeous evening you could imagine, and had a fantastic meal with a wonderful crowd and a wonderful man. He ordered his same Del Mar and Ortiz tacos, while I opted for the beef Old-Fashioned tacos. 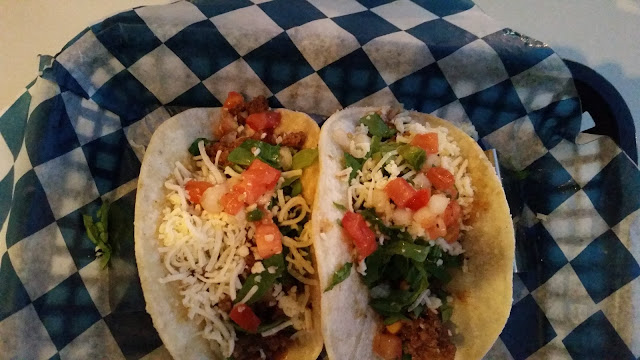 These tacos are made from stewed ground beef, veggies, cheese...the works. And you know what? Not a pickled jalapeno in sight. Awesome. Oh, and it's made with corn tortillas? Even better!

The first bite of these tacos are a big splash of juicy, soft flavor. The sharp crunch of the onions and tomatoes, the lettuce, the creamy cheese, and the flavorful beef, all sort of collide. Upon second and third bites, you feel like you're eating something familiar. Upon tasting the beef on its own, I found it reminded me of the kind of taco meat your mom makes...you know that taco seasoning that you find in the grocery store, in the spice aisle, in packets? It reminds me of that...or, at least, the romantic idea of what a Midwestern Mom's "Taco Tuesday" night at home would be. These tacos taste familiar, like "Home", which is definitely not a bad thing. Big thumbs up. I did enjoy this dish.

Of course, I must nod to dessert.

Picture this: cheesecake filling, warm and gooey; crisp, crunchewy shell of an almost phyllo-like pastry...all smothered with a warm chocolate sauce. Are you sweating, yet? Because I am. Honestly, I could have twelve of these. Just...get in my mouth. All of them.

Growing up in America, you have this romantic notion that you're supposed to have "a place." You know all of the sitcoms where your main characters sit in their same booth, in their same diner, around the same time of day with the same people? That's the feeling of routine, of solidarity, of community that you're sort of raised to believe in, to expect. I don't know how realistic it is to have a place like that in modern American life, especially for a Millenial, but I definitely wouldn't mind making Taco Republic my regular place...for these reasons:

I'm very glad that I came back to Taco Republic for a second go. Had I let that bitter taste of pickled jalapeno sour my entire impression of the place, I wouldn't have discovered the old-fashioned beef tacos or the cheesecake chimichangas or the churros(which are also really delicious). You can bet that I'll be back for more.
Posted by Wanna B Gourmande at 9:52 PM