I have a few vegan friends, and several friends with other dietary restrictions(celiac, certain allergies, whatever). I must admit that I agree with the practice of vegan diets, though I don't often agree with the militant asshole Tumblrinas that come with the territory. I suppose it's just like being in any other creed; the militant ones ruin it for everyone.

I'm lactose intolerant. This means that I don't have the certain enzyme/bacteria to digest the sugar(lactose) in cow's milk. I can drink it all I like, so long as I don't mind getting really farty and bloated. This keeps me from eating too much ice cream, though(which I definitely would, were I not lactose intolerant), so it does have its ups. I can eat cheeses without too much trouble, and I can eat all of the yogurt I want. This is good news, because yogurt = smoothies, and smoothies = excellent breakfast.

If you've been thinking of going vegetarian or vegan, do so in small increments. Introduce little vegan things into your diet, sprinkled in. Have twice as many vegetables with your steak, or just thin out your ground beef hash with some extra-firm tofu to make it last for your large family. We don't need to eat animal proteins as much as we do, and I just eat animal proteins about 4-5 times a week, versus all seven. Sometimes, I'll just eat a big, cheesey baked potato for dinner, or I'll have a cup of yogurt with some granola for breakfast.

Being healthy doesn't mean a huge change in your lifestyle overnight, unless it's recommended by a licensed physician, of course. As the Official Kitchen Witch for Pagan Health and Wellness, I can say this with confidence: eating healthy does not have to be a torture.

There are a lot of ways to add vegan items to your diet without changing it completely. With my lactose intolerance, I buy coconut milk to use with cereal and coffee. Actually, there'a really great  Vegan coffee house in Kansas City called Mud Pie Vegan Bakery that will make your mocha with coconut milk, in a biodegradable to-go cup! They also have lots of smoothies and baked goods, as well as vegan dog treats for a mere $0.50 a pop! (This is great, because my dog gets really farty when he has dairy...and soy, for that matter.)

But if you don't want to go out and buy a vegan smoothie every day, just make your own at home for a fraction of the cost. How much does eating vegan cost? Not as much as you think: 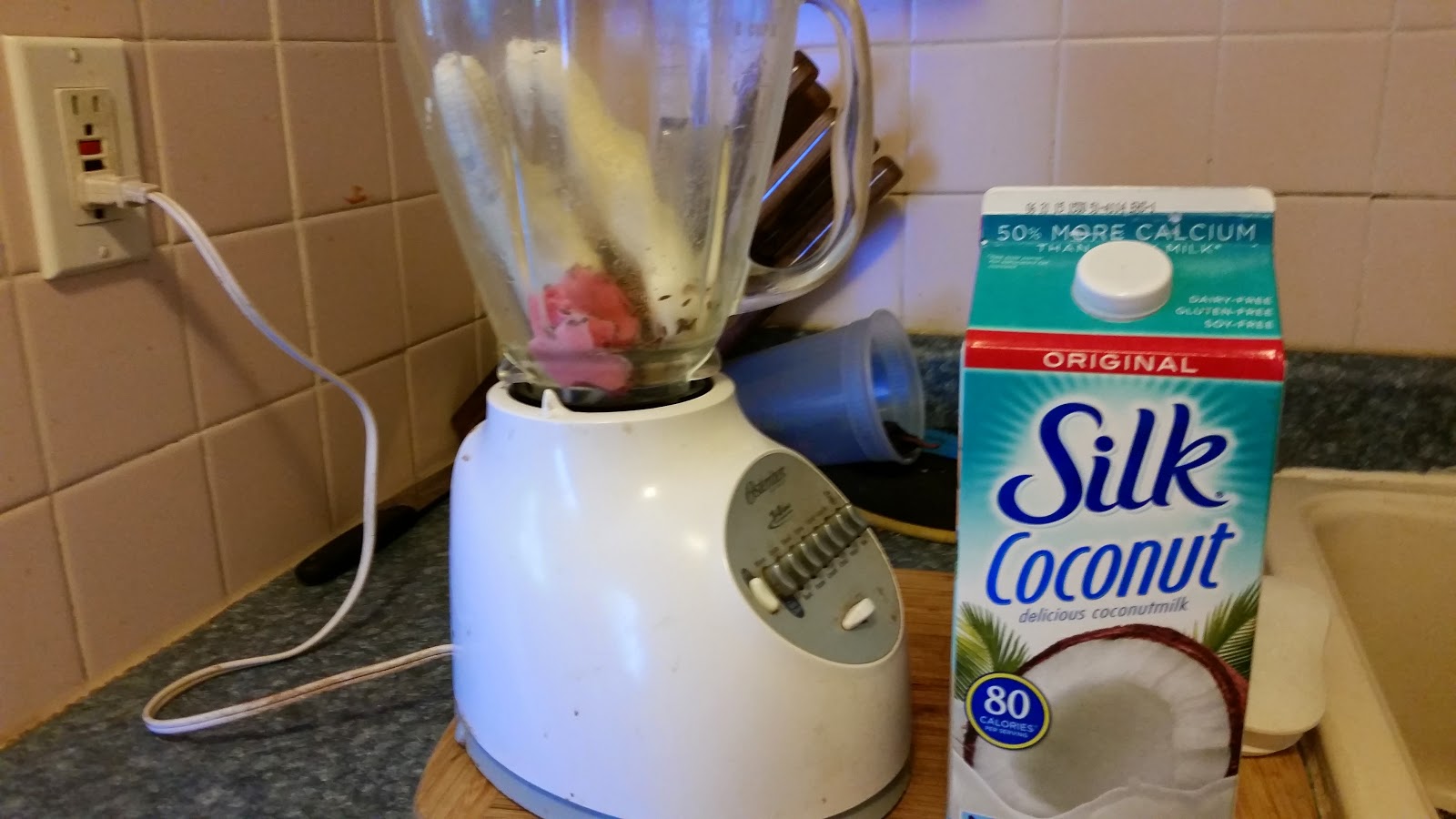 The bananas were purchased at a local farmer's market for a dollar per basket...with, like, three big bunches in a basket. The pink stuff you see in there is a rhubarb gelato that I made, but you can just substitute frozen yogurt(which comes in many flavors, and you can buy at ice cream shops by the pint, or at grocery stores. To be honest, though, I just buy the small cups of yogurt for $0.69 and add that in. Not only are the flavors endless, but they're usually low-fat. The coconut milk was around $5, for the sake of rounding up, but you only use about a cup per recipe. In 2 quarts, there are eight cups, so that's $0.62, approximately. I add about a tablespoon of flax seed into the smoothie, too, for that extra dose of fiber to really scrape out your insides, and the price on that stuff varies. A tablespoon of flax seed, though, is crazy-cheap.

Rounding up, this smoothie costs about $1.50 to make at home, versus the $5 to $7 you'll pay at a store. Sound cheap enough?

Here's how to make my banana smoothie:

If you want it colder, you can just freeze the yogurts or add a few ice cubes, but honestly this is just as good. You can use whatever fruit you want/have around. Like berries? Fuck it, add berries. Don't have bananas but have pears? Use pears! Just peel them and add them in, though you might want to blend for a little longer, as bananas are crazy soft. Add frozen blueberries or even pineapple to the bananas. Bananas are really good for you, and flax seed keeps you regular as a diesel. Enjoy this as you blog.

Posted by Wanna B Gourmande at 9:55 AM