Last night, I attended a fantastic Samhain ritual via Mrs. Witchy Words. I was pretty excited to go because she always does the best parties/rituals, but even moreso because of my pumpkin. (I love pumpkins. Remember my blog on pumpkins and pumpkin soup? Of course you do.)

Every year, no matter where I am at, or who I am with, or if I have kids even remotely around me, I carve a pumpkin for Samhain/Halloween. I don't know why, but I always do it the morning of, and I always light it up. It brings me joy to do this little thing every year, and I don't see the harm in it...unless, of course, I'm clumsy and stick myself with a knife. Then there's harm.

The original Jack-o-Lanterns were carved out of turnips and such, and were pretty scary. I mean, odd little faces just hanging somewhere in the middle of some misty Celtic field? Freaky. I much prefer the pumpkins.
This year, however, was different because my family did a wonderful thing! They announced a Pumpkin Carving Contest, via my mom and dad, saying "To the victor go the spoils!!!" And the "spoils" was $100 donated to the charity of your choice. I've donated and sponsored kids with Children International off and on, and I always liked them. Plus, I'm already doing a fundraiser for the CCVI this year(Children's Center for the Visually Impaired, right here in Kansas City) and volunteering with Young Women on the Move...so Children's International seemed like a good bet.

When I was a teenager, I spent a fair portion of my allowance on a little boy in Guatemala, who was about 4 years old at the time...let's call him Miguel.

I remember when Miguel would draw me pictures in his letters of his family or grassy fields or whatever. I don't know why, but the thought of a kid being so happy even when having so little, always made me tear up a bit inside. I think Miguel would be about 15 right now. But I digress.

As an Arizona girl, I am a huge fan of Dia de los Muertos. This is the Mexican festival of the "Day of the Dead", on the 2nd of November, where everybody goes nutshit crazy in the graveyards, the bars, the streets, the churches... The Mexican culture knows how to throw a party. I will say that. The long and short of it is that it's a celebration to honor your dead, get drunk, leave tamales and sugar skulls on the graves, and eat like you'll die tomorrow(probably because of all of the stuff you ate). I used to love coming to school in Tucson on Halloween to see all of the Mexican girls dressed up like Muertitas, with their glorious make-up jobs and flowers in their hair. I must say, I was envious. This was the inspiration for my pumpkin.

Out of the three pumpkins I had on my porch, I chose the One Too Many Squash, which was large and impressive, and also had a great combination of warty green and dusty orange. Plus, the seeds and pulp were tasty, and plentiful, so I could eat half and then throw the other half in my backyard for the birds and animals to have...and hopefully for me to have more of next year, if you know what I mean! I typically don't use those cut-out things anymore for pumpkin carving. You know, the paper templates you can buy at most grocery/super stores? I just found a picture of "sugar skull" on my computer and used that to draw inspiration from. I drew with a red sharpie on the (relatively) smoothest side of my pumpkin, and proceeded to evacuate all of the guts. I would have taken pictures of that, but my hands were all gross, and such.

The trick to making those professional-like glow that seems so luminescent is to scrape the bejeezus out of your pumpkin flesh. I mean, seriously. This guy had a 2" thick rind at least, and I spent a fair amount of time just getting the flesh around the parts I wanted thin enough. But, to save myself some time, I only scraped around the parts I knew I would need it. You'll see why. 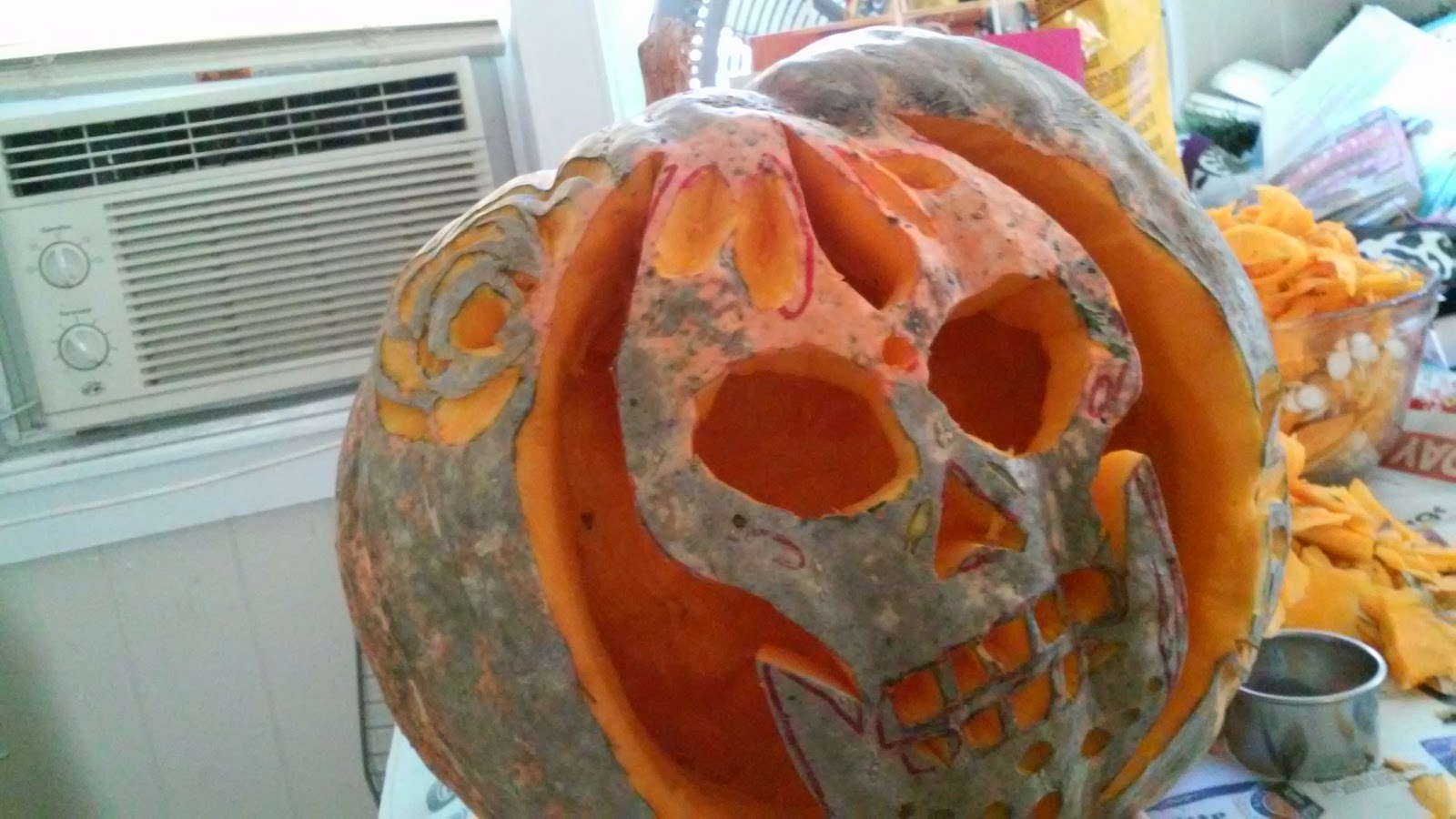 See those scraped parts at the top of the skull? I needed them thin on the inside so the glow would come from within. The carved flowers on the upper corner also needed a thin wall behind, so it could really show. I did a few test runs in the dark of my bathroom with the candle lit on the inside so I could really see how it looked. I must have stopped and scraped and re-scraped it about four times before I was finally satisfied with the luminescent glow from within.

I submitted photos of the finished pumpkin to my parents and they announced, this morning, that I won! So Children's International can get some help, all thanks to my awesome knife skills! I could have just donated myself, but this was fun. Plus, I got the opportunity to practice some stuff I learned in college, so that's good. And it got everybody in the spirit of carving pumpkins! I was so proud, I took it in to work and popped it on the host stand for everybody to see. Guests were greeted  by my Dia de los Muertos pumpkin and delighted by housemade pumpkin seed brittle in a nearby bowl. Then, when I got off work, I snatched the pumpkin from its pedestal and took it to the party/ritual with me. Pictures to come on that one via WitchyWords.Blogspot.com! 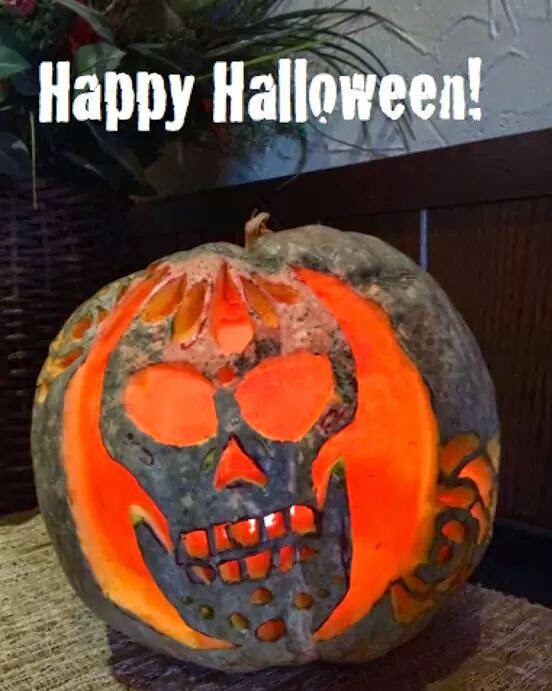