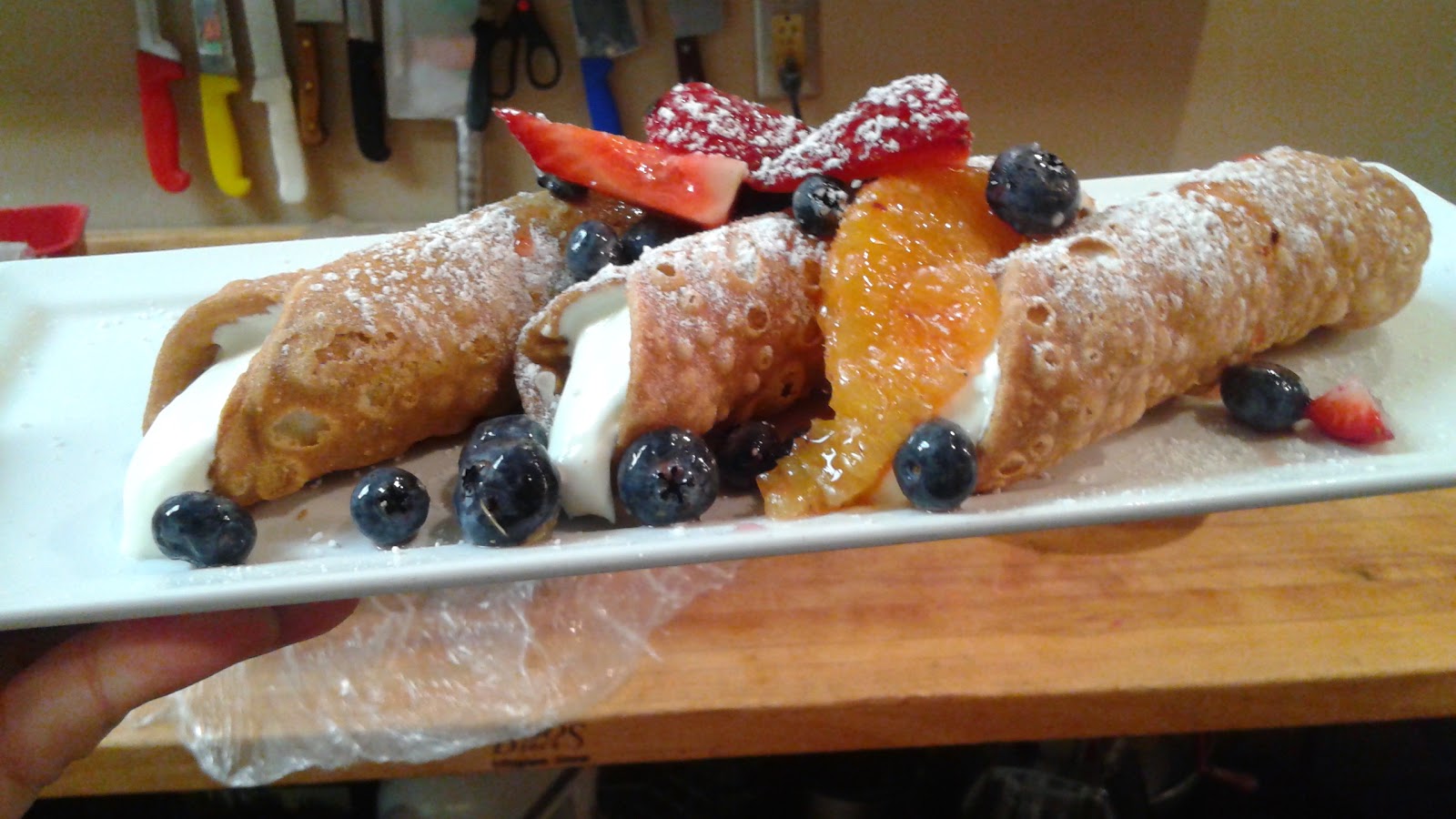 Cannoli are Italian pastry desserts. The singular is cannolo (or in the Sicilian language cannolu, plural cannola), meaning "little tube", with the etymology stemming from the Latin "canna", or reed. Cannoli originated in Sicily and are a staple of Sicilian cuisine.[1] They are also popular in Italian American cuisine. In Italy, they are commonly known as "cannoli siciliani", Sicilian cannoli. [wikipedia]

I would be lying if I said that I loved cannolis. Mostly because I'd never really had them until recently. A coworker of mine was getting married, and we - of course - hosted their wedding party rehearsal dinner. I didn't make their wedding cake because their mother wanted to, but I did get to fill up their tasty request for dessert on the night of their shower: cannoli. And by fill, I just mean piped filling into little premade shells.

Hey, slow down, homie. There's something to be said for convenience, and it costs exponentially less to buy these little shells versus taking the time to make them, including special equipment. If you want to make them yourselves, by all means: here's a link to do so, courtesy of Iron Chef Alex Guarnaschelli. But I didn't, because I had never eaten one before and had never made them before. I didn't want to screw it up. Again, not a classically trained pastry chef over here. Just a savory-learned girl with a knack for sugar.

Anyway, the filling is traditionally a ricotta/marscarpone mousse-like kind of tastiness with a hint of anise/allspice going on, as well as folded-in chocolate chips. I ate one of them when I filled them up, and it was nice. It kind of reminded me of an Italian version of a French eclair. Nice! So they were easy to do. But I only filled about 30 of them at a time, since I didn't know how long the party was going to go on and I knew a cardinal rule of the cannoli: fill to order, if you can at all help it. Pastries like these are wonderful, but only if you have that fabulous contrast of texture: crisp and creamy. Crispeamy.

Fast-forward to present day, I looked in the freezer and realized: "Oh, dear! I've bought far too many cannoli shells! They're just sitting there! Not being eaten!"

Well, we can't let food go to waste, can we? There are children starving in Africa. Totally insulting to waste food. And I can't send cannoli shells to Africa. (Or maybe I can? I haven't looked into it.) So I made my own version of the cannoli filling and sold it as a dessert special that night. It usually calls for ricotta, but I prefer marscarpone's mild flavor and creamy texture. It turned out great. Here's how you can make it at home!


Start with your marscarpone, which is chilled. You can either put it in the bowl of a standing mixer(which I did not) or just mix it by hand with a wooden/exoglass spoon(which I did). Mix with the vanilla, egg yolk(don't freak out, this is safe, it's pasteurized, and you're using sugar), half the sugar, and salt. Just stir to combine. Whip the remaining sugar with the cream using a standing mixer or just by hand with a whisk. All up to you.

Fold this mixture together in thirds. As in, take a third of the whipped cream and stir it into the marscarpone mixture to lighten it up, then the other third gently, and the last third gently. Folding is an easy pastry technique, but words are hard so here's a picture:

And here's the link to the tutorial in case that's too vague: Joy of Cooking.

Once your mousse is all folded together, you can fold in your chocolate chips, and toasted nuts(if you want). I left the nuts out because of nut allergy possibilities, but you can add whatever you like. Pipe the filling in using a pastry bag with a plain tip...or just a plastic/disposable pastry bag with the end snipped off...or just a plastic bag with the corner cut off. Do whatever. Fancy pastries don't have to have fancy equipment all the time. I also garnished with a fresh fruit salad of berries and orange supremes, and powdered sugar. You can top with whatever you want, if you want to top it with anything. I think these guys are pretty fun just plain on their own, but, again, it's your cannoli. Just don't fill it until you know they're going to be eaten. It takes about 10-15 minutes for these little dudes to go completely soggy and gross(factoring in a high humidity in my area), so fill to order if you can at all help it. 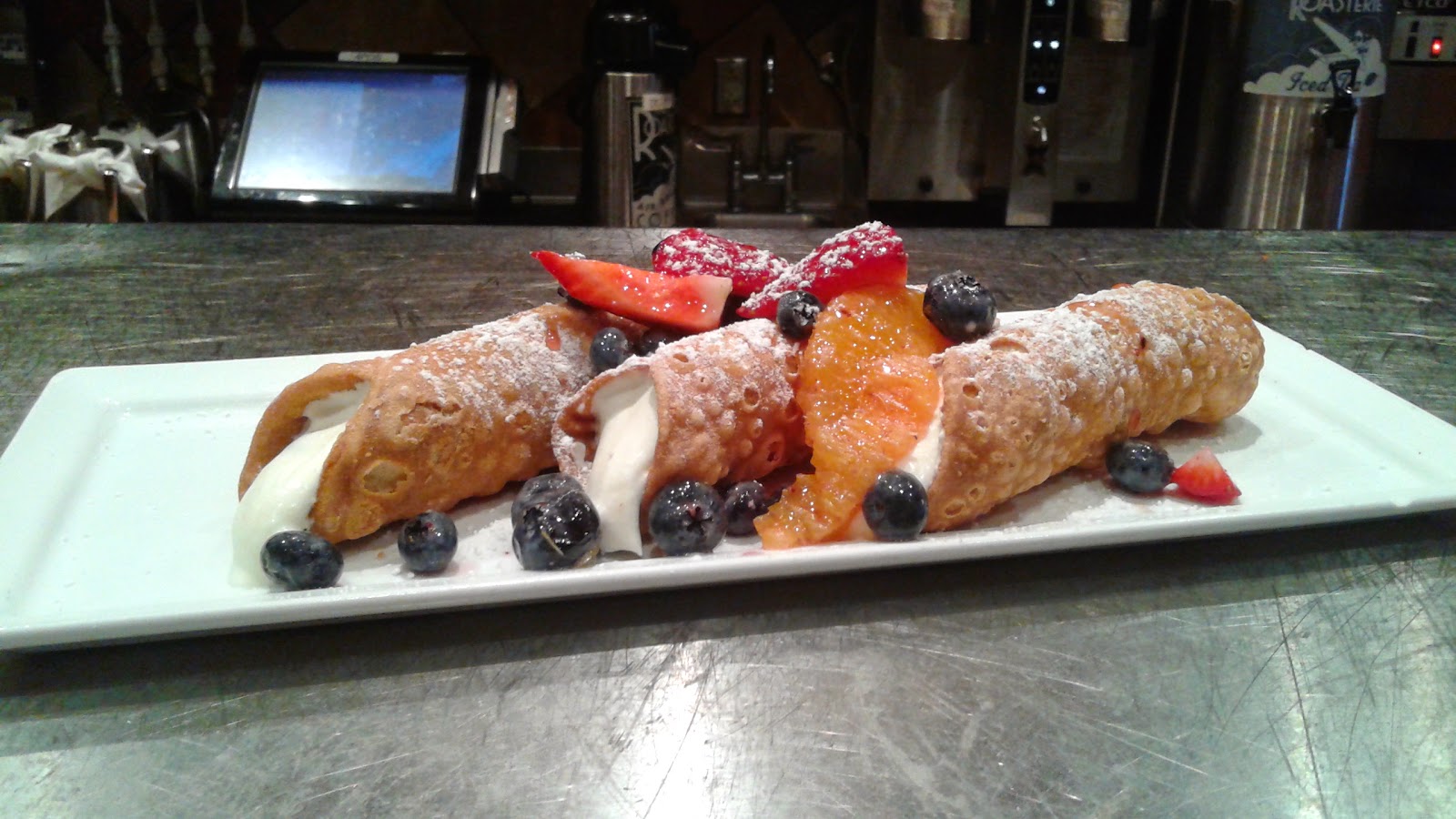 Also, I now have an Official Fan Page for my blog at Facebook.com/WannaBGourmande, so please visit and "Like" and share it! Thanks so much for your support. It really does mean a lot!
Posted by Wanna B Gourmande at 11:52 AM