A friend of mine has had a tough year. He and I met two or three years ago at a party, and he's a pretty alright individual. He's a good dad, great friend, and fellow casual foodie. He's a great addition at parties, and he doesn't seem to mind when I call him up for legal advice once in awhile...so that's good.

I have a sort of 'tradition' since I moved to Kansas City of baking friends birthday cakes when I'm invited to their parties or whatnot. I usually don't ask if I can. I just show up with a cake. I think it's because many of my friends are actually my boyfriend's friends first and they're bachelors. So I make cakes for them and we all gather around and sing "Happy Birthday" when I bring the cakes down, and it's a nice thing because it's a bunch of bachelors, usually all surrounding a beer pong table, ready to snap pictures with their phones as a grown man blows out candles on a cake.

Since A.'s friends are the first real social connection I've made in Kansas City, I kind of wedged myself into their little group. I honestly always felt a little out of place there, not just because I was usually one of the only girls there, but was beer pong and Minecraft and movies and UFC fights...and while that's all well and good, it's not generally my cup of tea. It was really awkward when I first was brought along to these parties, mostly because my boyfriend has a really bad habit of forgetting I have no clue as to any of who these people are, and never introduced me properly. He would just go in and start talking, and I'd just be standing there. Awkwardly. In someone else's house.

On a side note of this, how hard is it, really, to stick by your lady and say "Jack Donovan, this is my girlfriend Kolika." See how that works? I learn  his name, he learns my name, and we have a "nice to meet you" and "how do you do" and whatnot, and then we can start to socialize. Seriously. When you bring someone along for a party into an entirely new group of people, it's just the polite thing to do to introduce them. But I had none of that. So I did everything myself. And, God, is is weird to just walk up to a group of people that are having a nice conversation and just blurt out:

"Wandering around, I guess. He just sort of left me here to fend for myself."

Anyway, my friend's birthday is this weekend, so he Facebook messaged me, asking me if I would continue my tradition of baking cakes. "Of course!" I said. Not only had I not done something nice for a friend yet this year, I hadn't seen him awhile.

"What did you have in mind?" he asked.

"I don't know. Your cake. What's your favorite?" 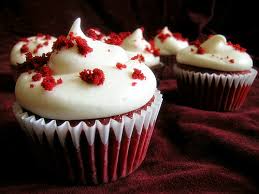 Red Velvet Cakes are supposed to be spongey, wonderful cakes that are a silky red color with a hint of cocoa flavor. The reason they're red is because the way they used to process cocoa made it red. Traditionally, red velvet comes with a cream cheese frosting.

Cocoa in light hints. Spongey cake. Cream cheese frosting. What a combination! It's no surprise that red velvet cheesecake would be a thing.

So, let's think about pastry elements. A cheesecake, while a very-very-very daunting task for your average home cook, let's not get intimidated too much by it. When faced with difficult recipes or difficult tasks, simply assess what the fear is: you're afraid of the unknown. And it's all good! Unknown things can be scary. But let's think of what we do know, and then break it down.

Cheesecake is made of cream cheese, eggs, heavy cream, flavorings, a tiny bit of a starch stablilizer... So what do we know how to make that involves eggs + liquid? Custard. So, okay, cheesecake is a custard! Crust? A crumb crust. Graham crackers plus butter. But what if I want something more exciting than graham cracker crusts?

This is when I put on my thinking cap on. The creative process is different for everyone. I think my favorite technique is one I snagged from Chef Grant Achatz. It's called Flavor Bouncing. Here's a video!

So. Cream cheese. What's good with cheese? Crackers! Buttery crackers, with salt... Do buttery salty crackers go with chocolate? Sure! Ever had chocolate-covered potato chips before? So instead of doing a graham cracker crust, let's use buttery Ritz crackers in lieu of the norm. Add a tablespoon or two of sugar to your normal graham cracker recipe when substituting the Ritz crackers...or you can use my recipe. Your choice!


Assemble the crust in either a springform pan or your standard 9" cake pan. Press the damp, buttery crust into the bottoms and sides, making it as even as possible. Bake at 375 F(190 C) for 10-15 minutes, until the crust is golden-brown and dry on the bottom. Set aside, and lower the oven temperature to 300 F(140 will do just fine for my friends in the rest of the world).

Combine the cream cheese and sugar in your standing mixer with a paddle attachment on medium-low. You're not looking for air bubbles in this particular creature, you just want smooth, creamy, no lumps. Cream for 5 minutes on low, scraping down the bowl with your spatula quite often. Add in the eggs, one at a time, mixing for 2 minutes after each egg. Remember. CREAMY. SLOW. Cheesecake takes time and love. When all of this is said and done, you'll be happy you took the extra few minutes.

Add flavorings at this point, and then the cocoa powder with the cornstarch, and salt. Cream this in for another 2 minutes. Don't worry about "glutens developing" since this is flourless. This could actually be a totally gluten-free recipe if you were to substitute your crust for gluten-free cookies or crackers or something of the like. But that's a different blog.

Add in your final liquid. The original recipe called for heavy cream, but buttermilk is going to give this a pleasant tang to offset the bitterness of the chocolate. Will this mess with the fat ratios? Not too much, no. But that's why I added the extra teaspoon of cornstarch. Baking and pastry is just science, guys, and all science has rules. The most-basic rule of science is that action A plus action B equals result C, and if you follow those directions, you'll get result C every time.

Pour your perfectly-smooth custard into your crust, scraping out your bowl. You'll still have air-bubbles, but to avoid the big ones, take your filled cake pan/springform pan and raise it about six or so inches off the counter and drop it flat. The force of being dropped will bring the air bubbles up and pop them, thus resulting in a nice, smooth custard with uniform bubbles. Yum. Time to bake.

Set up a bain marie in your oven. I used a 12" cake pan to set my 9" pan inside and put it on the middle rack. To prevent water from splashing into the custard(which will be no bueno), fill the water bath in the oven instead of filling it on the counter and carefully walking and swishing water here and there. Just take a pitcher and pour it in, until it reaches about 3/4 of the way up the sides of the pan. Bake for 75 to 90 minutes at 300(140) degrees, checking on the oven temperature frequently, and making sure that the water isn't hot enough to boil.

Once baked, open the oven, and turn the oven off. Leave it open for five minutes, and then close the oven door. Let this sit for another hour, at absolute least. I like two hours, only because it's such a delicate custard(in its own way) that it needs to be cared for. Seduce it into the cold. You can't just pop this dude in the fridge. Let it come down on its own. After that rest in the oven, you can remove it and let it sit on the counter for awhile. But don't pop it in the fridge until it is, at least, at room temperature. You can remove it from the pan at this point, wrap it tight in plastic wrap, and freeze it for up to three months. Or just wrap it tight and keep it for up to a week in the fridge. Or maybe longer. I'm not actually sure. It never lasted that long in my possession.


I mean, seriously. It looks like an alien landscape of Awesome Planet. And to think it's going to my friend's tomorrow for his birthday...

Well, I might just make one for myself, later.
Posted by Wanna B Gourmande at 10:07 PM No comments: