I got out of "Speech" class today and knew I wanted to spend at least some of my day off at the Penn Valley Dog Park. My friend, Buddha, has a few pups of his own so I knew he was up to go whenever I was. I was also super-hungry after class so I called him around noon and said:

"Hey dude, I'm totally starved - do you want to get some lunch?"

Originally, we were planning on the Vietnam Cafe on Rainbow and 39th street, but they were closed on Mondays. (Review/blog soon to come on that one!) I was looking on FourSquare on my phone and saw something that rang familiar: Po's Dumpling Bar.

A couple of friends had recommended the place to me at a few points, so I texted Buddha - who was not there yet - that Vietnam Cafe was closed and that Po's was right down the street.  He said "Okay, 2 mins."

For those Kansas City locals who do not know, 39th street near Westport is simply an amazing place to find food. Seriously, you walk down the street and places like Anna's Kitchen, Blue Koi, Friend's Sushi Bar and Bento...a whole little avenue of yummy flavors! But I digress.


I got in and immediately loved it. Not only was the smell delicious, but the atmosphere was great. There were neat prints and pictures all over the wall, and it seemed to embody what everybody thinks hip, new food should be.

Buddha and I got in and, of course, we chatted for a little. He had been here before and when I asked what was good, he said it depended on what he was in the mood for. This means just about everything was good.

What was semi-surprising is that it wasn't just dumplings. My friend had kind of led me to believe it was just all sorts of dumplings, kind of like Noodles & Co only with, well, dumplings! But they had all sorts of delicious Chinese food options, so I ordered the Char Su Buns to start with(Buddha and I split it), and the Beef Broccoli lunch, which came with a soup(egg drop, of course), rice and crab rangoon. Buddha ordered these awesome-sounding Pork dumplings with chili sauce off the Specials board.

When the egg drop soup came, of course I devoured it. Egg drop soup is actually a great way to rate the skill of a Chinese place. It should have a velvety mouth feel with the ribbon of egg white evenly distributed, but not over-cooked. It should not be too salty, and leave you wanting more. Of course it was delicious - the golden color seemed to come alive and say "Happy Chinese New Year."

When the Char Su Bau came(Chinese steamed buns) they were in a beautiful steamer tin. They came, big and beautiful. I wished the plates were black so the pictures were more dynamic. The dough was perfect - I mean REALLY perfect! And I wish there was a little more filling in the buns, but then again I was also famished so perhaps I am not being a fair judge. 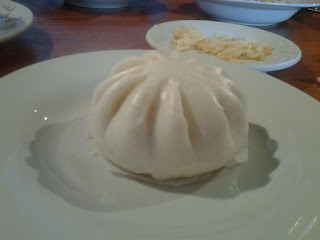 The food came and it was a perfect beef/broccoli portion. The crab rangoon wasn't the best I've ever had, but it came very close. The filling was hot and sticky, just the way it should be, and the rice was steamed to perfection. A nice amount of sauce came on the beef and broccoli dish, and the broccoli was tender yet still crisp. I would have taken a picture of that, too, but I ate it too fast because it smelled so good.

Buddha and I continued chatting throughout the meal about this and that. Then he said the magic words:

Well how could I say no? If my readers recall, I did a recent blog all about green tea confections, so I was more than eager to try it. We ordered some after the meal and it came out in the most-adorable little dish.  The color was so vibrant and fun. The taste wasn't bitter or terribly sweet, but rather refreshing.

As I ate it, I remember thinking that it might be nice with some sweetened sour cream sauce for it. Maybe a chocolate syrup. But it was good on its own. It reminded me of the saying "You're not supposed to put any toppings on good ice cream." This was very good ice cream. I think I remember saying at one point "I want a big tub of this."

I don't want to say that it's the best Chinese food I've ever had. I will say, however, that the Char Siu buns are to die for, and I can't wait to go back for more food. I might go back once a week and try something new every time. Yeah...that sounds good.

You guys should go try it too. And the rest of 39th street, which is probably where I'll spend half of my Tax Return this year.
Posted by Wanna B Gourmande at 5:37 PM No comments: 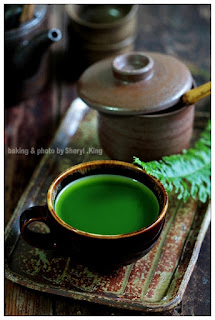 Basically, all things that are good. But the neat thing about these trends is how fun it is to be on Tumblr and see all the beautiful pictures people are taking of the creations. I've decided to look into Green tea today.

They say that it was discovered about 4000 years ago in China. It has really nifty health benefits, and it's tasty. I personally love Matcha, which is the superfine powdered/pounded-into-a-powder green tea stuff. You can use matcha for lots of neat things; the Japanese use it in their very intricate and beautiful Tea Ceremonies. Here's a few neat things that I've found on my Tumblr dashboard. By the way, if you're wondering where my Tumblr is, then...well there.


Anyway, matcha is becoming more and more trendy nowadays. I see it especially at school! As a matter of fact, a friend of mine, Andrionna, was in my class finishing up some things for her capstone project. She was doing a beautiful Japanese-inspired course with croquembouches and a matcha cake. I remember seeing the beautiful and vibrant green color and thinking to myself:

Okay it probably wasn't as verbose, but it was definitely along those lines. The flavor is both light and sweet. The color is dazzling. Like somebody took emeralds and ground them up and infused them with sunshine to make it taste better. Does that make any sense?

Despite what you may think of tea and green teas, Matcha has this beautiful mellow, semi-sweet taste that's near-perfect for desserts. Ready for some more pretty pictures? I am!

If you're feeling inspired, check out Hungry Rabbit for this Matcha Dacquoise cake! (Not only is it delicious, but it is full of antioxidants, which is good in this day and age. It's a little labor-intensive, but it's lovely to look at!
Posted by Wanna B Gourmande at 2:04 PM No comments:

Sorry I haven't been blogging as extensively. I got this awesome new job - and it's exactly what I wanted. It encompasses everything I love about the food industry, but enough about that. This is about Pancho's Villa of Parkville, MO.

One would think that it is a conflict of interest if a Chef reviews her own restaurant. I honestly think that as well, so I'm just going by quotes of my friends in Culinary school that have been gracious enough to take time out of their busy schedules to come to the restaurant and tell me what they think. For the sake of their privacy, I will use Pseudonyms. And funny ones at that.

Not Fat but Not Skinny Chef - "Some of the best Mexican food I've had in a while."

Not Fat but Not Skinny Chef's blond Friend - "Oh my God! I wasn't ready for all that! I want like four of those mini chimis to take home."


I can't remember what my boyfriend and his parents said exactly so I don't want to quote them, but they enjoyed the quality of the meat and whatnot. And my boyfriend definitely loves it whenever I'm able to bring stuff home from the restaurant.

Also, I'm from Arizona, so I know good Mexican food. With portions and whatnot, it's also a very good value for what you order - and we also do have vegetarian/vegan options if you so need.

The Front of House staff is always a delight to work with, and I enjoy cooking the food every day. The only thing I can say without too much bias is that the food at Pancho's is made with a lot of heart. It's a recent re-open/revival of the same restaurant that was there prior to the Great Flood of '93, which veritably shut most of Parkville down for a time. Now the people that owned it before have it again, and it's coming back with a great deal of heart and soul.

Bottom line, not nearly enough people know about this little gem, and I'm not just saying that because I work there. I care very deeply about this restaurant and I know that everybody who works there does as well. It's a family affair and I know we all work hard to make sure everybody leaves happy and full.

Pancho's Villa on Urbanspoon
Posted by Wanna B Gourmande at 9:27 PM No comments: