So Thanksgiving was amazing. Like, historically so. Those of you who saw my twitter posts(if you're not following me, you can do so here at Twitter.com/WannaBGourmande), I made a gravy so awesome that my dad thought it was soup(and he recently went vegetarian). I also made a beautiful Fennel Vichyssoise(which I will be posting the recipe for in a future blog(probably tomorrow, but most-likely later today)), a slew of pot de cremes, and the turkey.

There were about 20 or so of us in Grandma Janie's house, so we made two turkeys. Dad said it was the best turkey he's ever had(but he's my dad so he has to say that), and the family of mine that had some said it was amazing, too. My aunt even asked what my secret was. Well, the secret is brining, and it's in my previous blog, which you can find it here.

At 9 am, after two or three turns in the brine overnight, I took the turkey out and patted it dry. A little trick to browning meat is drying it properly, so remember that. Then I roasted:

...all in the oven at 400 degrees on a sheet pan for 5-7 minutes, or just until it got a little soft. I wasn't looking to cook it, just soften it a tad to get the flavors released. Then, take a container of whole cloves and stick each piece of apple with two. So you should have 8 cloves. That's ALL YOU NEED. Stuff the garlic, onion and apple into the cavity of the turkey(DO NOT STUFF IT) along with two sprigs of tarragon.

Once that is done, set it in your roasting pan. Then rub a palm-full of rubbed sage powder all over the bird, and crack some black pepper over the surface. THEN(here comes the cool part) take a large, relatively square piece of tinfoil and fold the corners together to form a kind of triangular shield. Mold the shield to the turkey breast. If you have to, make another triangle shield to cover the breast portion entirely. We want to create a barrier because, let's face it, the dry turkey breast on Thanksgiving is one of the things that we don't have to deal with anymore. 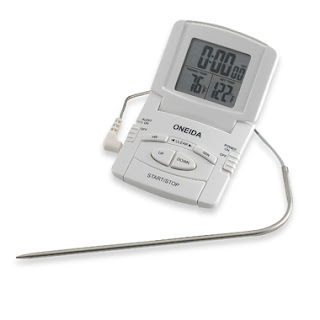 With the oven still at 425, pop your turkey in and let it hang out for 30 - 45 minutes, just until it's browned on the surface. THEN(here comes another cool part) we open the oven door and slide out the turkey to place our shield on the breast. This will keep it moist without having to sacrifice the beautiful and iconic browned turkey color that we all adore. Slide it back in the oven and lower the temperature to about 325 degrees and continue roasting for the duration of the cooking period.This dual-temperature cooking method will allow us to keep the bird moist and cook it all the way through.

We had a 20 lb bird, so it took about 2.5 hours to get it to the sweet spot of 140 degrees in the thigh meat, which is really where you want to check. Always use a thermometer when checking for meat doneness. There are actually super-neat probe thermometers that can go inside the oven with a long wire, while the gauge sticks outside on the oven or countertop and goes off with a beep when its at the right temperature. You can find them at Bed Bath & Beyond for about $20. This is a good model right here.

Anyway, once the thermometer reaches about 150 degrees, simply turn off the oven off and leave it for another 20 minutes. The residual heat in the oven and in the bird will continue to cook the bird, and will leave it so moist. It will look like this once its done.

To make the gravy, remove the bird from the pan and set it on a cutting board lined with aluminum foil(to catch extra juices), and pour all the drippings in a sauce pot. Use a ladel or a soup spoon to skim off all but a few tablespoons of the fat. Mix the fat with an equal amount of flour and drop that in the drippings. Cook over a low simmer for about 6-8 minutes to cook out the raw flour taste. Add about two cups of room-temperature milk once that's all done and let simmer longer to develop more flavor. It should simmer for about 10 minutes with the milk, but never boil. Taste often for seasoning, but you shouldn't really need any, since the turkey is seasoned already. Whisk often.

Anyway, once everything was all done, we packed up and went over to Grandma Janie's house. Here's what we ate:

So there you have it. Thanksgiving at my Grandma's house. A. was with us and said it was probably one of the best Thanksgivings he's ever had. I couldn't really move much after that. I'm pretty sure they had to carry me out. Or at least assist. Anyway, we're going over there in a few hours for leftovers. It will definitely be awesome, especially considering there was a lot of gravy and my turkey is still going to be super moist after the brining.
Posted by Wanna B Gourmande at 8:41 AM